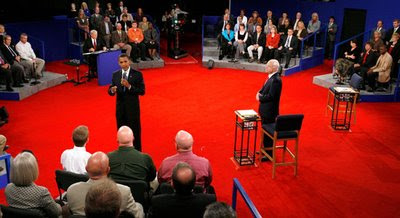 Okay, so I watched the 2nd Presidential Debate yesterday (recorded it). Although some pundits thought it was boring and less interesting that the first one, i beg to differ. I thought it was MORE interesting. Now, granted, the information both candidates put forth was not new, but i thought the value of it was to be found in not only the manner in which it was imparted, but in body language and attitude.

First of all, I felt that Obama was clear, articulate, and largely effective in imparting his vision for his presidency. McCain on the other hand, came off as a disrespectful, condescending, disingenuous BULLY. I mean, to refer to Obama with a jutted thumb and a designation of “THAT one” was bad form. It showed great disrespect. Meanwhile, Obama would sit calmly, composed, and grin mildly at the many insults McCain threw out. This made him appear presidential, and showed him to be graceful under pressure. McCain’s constant use of the phrase “my friends” when he addressed the audience was insulting. I mean really. No one there was HIS FRIEND. He was trying to align himself with common folk, and it only came off as presumptuous and transparent. His attempt at humor might have brought amusement to himself (he laughed each time he said something he thought was funny) but it was met with mostly silence. This does not suggest he is in any way “in touch” with the voters. Hell, he even said something insulting and sarcastic to Tom Brocaw…

Brokaw: Obviously the powers of the treasury secretary have been greatly expanded. The most powerful officer in the cabinet now. Hank Paulson says he won’t stay on. Who do you have in mind to appoint to that very important post?

McCain: Not you, Tom.

WTF?
More of the same ill-conceived retorts from McCain.

Early in the debate, McCain tried to blame Obama for the Freddie Mac and Fannie Mae collapse. McCain pointed to Obama and said, “They’re the ones that, with the encouragement of Sen. Obama and his cronies and his friends in Washington, that went out and made all these risky loans, gave them to people that could never afford to pay back,” McCain said. On rebuttal, Senator Obama said, “I’ve got to correct a little bit of Sen. McCain’s history, not surprisingly. … In fact, Sen. McCain’s campaign chairman’s firm was a lobbyist on behalf of Fannie Mae, not me.”

Another time, McCain made some reference to a famous quote to “walk softly and carry a big stick” and then accused Obama of having said he would “invade Pakistan.” This is of course, not what he said. He said he would go after al Qaeda, the Taliban and Bin Laden in particular, with or without help from Pakistan. Never did he say a word about aggression toward Pakistan itself. To this fresh morass of spin, Obama responded, “This is a guy who sang ‘bomb, bomb, bomb Iran,’ who called for the annihilation of North Korea – that I don’t think is an example of speaking softly.”

Then McCain gave a laundry list of things Obama was “wrong” about, and added, with a high degree of disgust in his tone, “We don’t have TIME for on-the-Job Training, my friends.” And that again, Obama just “didn’t understand” so many things.

Obama defended himself with this brilliant response:

When Sen. McCain was cheerleading the president to go into Iraq, he suggested it was going to be quick and easy, we’d be greeted as liberators. That was the wrong judgment, and it’s been costly to us.

So one of the difficulties with Iraq is that it has put an enormous strain, first of all, on our troops, obviously, and they have performed heroically and honorably and we owe them an extraordinary debt of gratitude.

But it’s also put an enormous strain on our budget. We’ve spent, so far, close to $700 billion and if we continue on the path that we’re on, as Sen. McCain is suggesting, it’s going to go well over $1 trillion.

We’re spending $10 billion a month in Iraq at a time when the Iraqis have a $79 billion surplus, $79 billion.

And we need that $10 billion a month here in the United States to put people back to work, to do all these wonderful things that Sen. McCain suggested we should be doing, but has not yet explained how he would pay for.

Now, Sen. McCain and I do agree, this is the greatest nation on earth. We are a force of good in the world. But there has never been a nation in the history of the world that saw its economy decline and maintained its military superiority.

And the strains that have been placed on our alliances around the world and the respect that’s been diminished over the last eight years has constrained us being able to act on something like the genocide in Darfur, because we don’t have the resources or the allies to do everything that we should be doing.

That’s going to change when I’m president, but we can’t change it unless we fundamentally change Sen. McCain’s and George Bush’s foreign policy. It has not worked for America.

In fact, McCain spent so much time attacking Obama, that he had little time to relate his ideas about the challenges ahead. Obama at least stayed on message, and articulated with clarity his ideas. When McCain derided Obama for his statement that he would sit down and talk with our enemies (such as Iran), Obama was able to clarify this attempt at making him look weak. He said that we have learned that NOT talking led to many of the problems we have right now in foreign relations. He also admitted that it might not work, but that he would make the attempt and make it clear that certain behaviors would have to change, and if they did we could all work together toward common goals, but if not, the military options would still be on the table if necessary. This would give us more leverage in the international community because we would have attempted diplomatic solutions first. Something the BUSH administration has been staunchly against with Dubya’s Cowboy Politics.

Another thing: McCain shook the hand of a Navy guy, thanking him for his service, and trying his best to personalize that connection. At the end of the debate, McCain AVOIDED shaking Obama’s hand, and Obama got the message and didn’t force it. Then McCain left early, while Obama went over to the retired Navy man and engaged him in conversation, as well as other members of the audience. McCain was long gone. This made McCain look petty, and again, disingenuous.

The polls agree with my assessment, evidently. McCain’s numbers went down, and Obama’s went up. Even Republican pundits were saying that Obama appeared “presidential” and McCain appeared condescending.

One thing i think we desperately need in the White House is an INTELLIGENT PRESIDENT who can communicate with clarity, and sincerity, and keeps calm under pressure. This would NOT be McCain, but Obama.

"I now have a bone spur on each shoulder. I think I might be sprouting wings."

Books aren't written, they're rewritten. Including your own. It is one of the hardest things to accept, especially after the seventh rewrite hasn't quite done it. ~ Michael Crichton

â€œA man is accepted into a church for what he believes and he is turned out for what he knows.â€ ~ Mark Twain

no, we can't, Gavin. We missed that window of opportunity because there are too many stupid, evil people in this country. Now, it's about surviving until there's a viable vaccine.

We cannot ignore #COVID19 because it’s inconvenient or we’re ready to go back to normal.

If we work together, we can flatten the curve.

Donald Trump wants to declare this health crisis over and unemployment solved so that he can get back to his campaign rallies. But he’s wrong — on both fronts.

We need a president who will actually do the work needed to get us through these crises.

so, is this how Barr and his minions plan to kill her?

I don't really know what to make of this 😠 https://brownvalleyobserver.com/2020/07/03/ghislaine-maxwell-has-tested-positive-for-covid-19-in-new-hampshire-jail-doj-reports/amp/?__twitter_impression=true