↓
Home→CREATURES→animals→Beady Eyes in the Trees:
what the fuck is that?
0
(0) 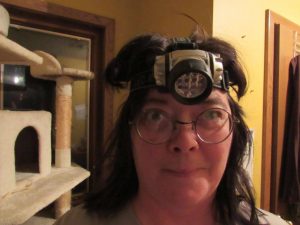 So, the other night, my wife and I were taking the dogs out and I had on my headlamp, as usual

I always look around first, just in case. Not only have there been reports of coyotes trotting down our street, but we have all kinds of critters in the area, because we are surrounded by wooded areas– Possums, raccoons, foxes, armadillos….and I’m just cautious that way. I don’t like walking into a dark area, or having the dogs do that, without knowing what’s out there.

Anyhoo….I was waiting, and sweeping my light around the trees, and noticed some beady eyes looking back at me.

Yes. Those were eyes. They blinked at me, and they moved around.

“Hey baby,” I said. “There’s something up there in that tree.” I watched closely and it moved a little, but I couldn’t make out what it was. “Probably a squirrel.” I went inside to fetch my camera, because I hoped the zoom would help out and I could get a photo of this critter.

I kept taking shots and kept getting either blurry photos (because it was hard to look straight up and hold the camera still on zoom) and weird shapes. At first, I thought it was a bat. But the color was all wrong, unless we had albino bats.

As I checked the camera screen for the first clear photo, I said, “What the fuck is that?”

She came over to look. “Weird.”

Then, I thought maybe a baby possum. But that seemed wrong too. “It really looks most like a hamster.” 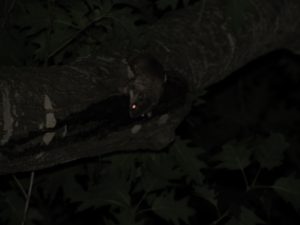 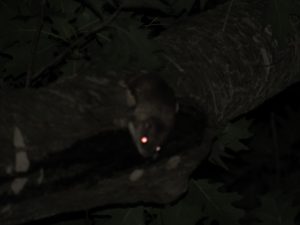 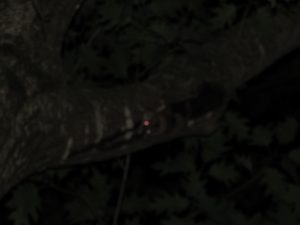 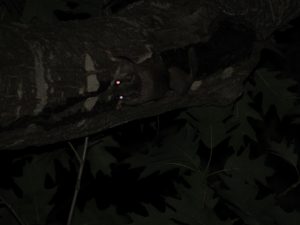 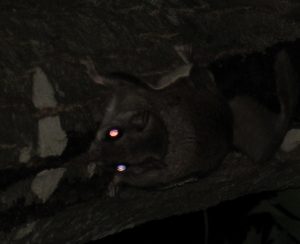 “What? Haven’t you ever heard of a tree hamster?” (I’ve come up with weirder things. In my book, Quintessence, I mention a Tree Squid.)

We both took turns taking shots and resting our necks, and finally, we got a much better angle and a clear picture, and said, “It looks like a flying squirrel.”

Sure enough. That’s what it was.

I’ve never seen a flying squirrel in person–only in pictures. And I never thought we had them around here.

I hope he stays. I’d love to see him spread his skin flaps and soar past my window while I’m writing.

For much better photos of critters and other things, visit our photo site 2Dollar Shots (High Quality Photos without the High Cost)

"I do not believe that nature abhors a vacuum. If it did, we would not have to listen to the likes of George W. Bush."

“Style is to forget all styles.”