Storage trip update from Saturday.
So, I’m standing on top of my Cherryot, 1 applying bungees to things I wish I didn’t own, and I’m being careful to step only on the reinforced areas of the roof, and avoid the sunroof entirely, when my foot slipped. 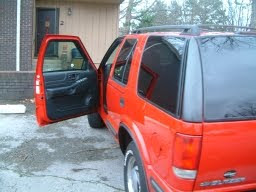 Now, I was wearing my Sketchers which are really comfortable to take my nightly walks in. But I discovered, rudely, that they don’t have um…much…traction. At least not on top of the Cherryot.

So in that surreal, slow-motion movie moment kind of way, I began to fall, feet first, sliding down the side…not so bad, really. I could have slipped and fallen backward and landed on my back. So As my feet are striking the ground, i am at the wrong angle, and I just lunge forward…not in a dive-roll, like I did that time in Colorado Springs 8 years ago, on my apartment stairs…that was truly inspired, and of Olympic quality—no, this fall was awkward. I landed on my feet first, then my knees and hands…skidding ever so slightly.

You want to know the first thing i thought after that? I mean, I was feeling pain already, and I had just recovered from a ruptured disc in my neck a few short months ago…but you know what my first thought was?

I hope no one saw that.

I actually looked around quickly to see if anyone was about. I would have bled a few extra drops, just so I could take the time to make sure no one saw me do something so patently ungraceful.

The second thing i did was assess the damage. After realizing I could still stand up and was mobile, the next thing i noticed was that I had a nasty splinter in my fuck-you finger. I don’t know when that happened.

I went back to work on storage, but knew that i was done for the day. I had to wrap it all up and come back later to do anything i was planning to do then.

So when I finally got home, I groaned my way out of the Cherryot, knowing I was not going to unload that stuff this time. It could wait until tomorrow. My joints and muscles hurt more than the minor scrapes to my knees and palms. I was just going to stick a French Bread pizza in the oven, take a hot shower and ibuprofen, put peroxide and triple antibiotic on my wounds, wrap up my wrists for support, ice my back, and just lie down and read.

And that’s what I did.

Until now, of course, when i could no longer resist coming over here and writing something.

A part of us dies when any negative habit becomes a mindless activity, especially when we continue to do it because it's easier (or less painful) than leaning into the discomfort of change. In the process, we unconsciously become a little more numb to life. ~ Dennis Merritt Jones