Amazing, how she can write so much about coffee and the mundane moments within her domestic trivia. Go ahead and say it now and get it over with. I know you want to… Domestica (tm) is one of my subjects, because I’m a domestic sort. Or domesticated. In my domicile, independent and cut off from the outside world. Except for the Internet, which IS the world, really, so…notsamuch.

Anyhoo, moving on...My first sip of coffee today was too hot. I just burned the hair off my tongue. I hear you saying, “There is no hair on your tongue.”

To which i respond, “Not Now!”

See, this happens frequently. You’d think I’d learn. The definition of stupidity is doing something the same way and expecting a different result. . .some say that’s the definition of insanity, but I think it fits stupidity better. Insane people do much more interesting things, and sometimes I write about that too. But I don’t consider myself either stupid or insane, so there has to be some other reason why I have burned my tongue on coffee more than once.

Masochism?
No. I don’t like pain. I don’t even like spankings when they’re sexual. (Freak! stop hitting me! You’re supposed to be trying to bring pleasure, fer chrissakes!!)

So the best explanation I can come up with, is that I’m forgetful. I think i wrote a blog about that before, but….not sure. Note to self: take more Ginkgo Biloba.

I’m uncertain as to how this current burning happened though. Maybe it had something to do with the release of heat from my cup since I put it in the microwave, because I cleaned the skin off the inside of it (residue from yesterday), and then imagined all the germs one can get from swishing around a sponge on a stick, after it has been swishing all over everything else in the kitchen…I was reminded of that compelling and oddly disturbing commercial where the housewife (sorry, Domestic Engineer) was gleefully wiping down her kitchen with a raw hindquarter of a chicken. Point taken. (Who says we are immune to advertising?) 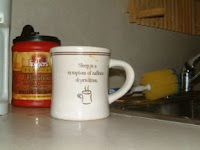 So I put the mug in the microwave, soon followed by the sponge-on-a-stick and the dishcloth… because I read on Web M.D. that nuking wet sponges and dishcloths in the microwave for two minutes, destroys almost every germ known to woman–99%, according to the study. So of course, I had to put the coffee cup in the microwave too, since it had been contaminated by the germy dish- sponge- on- a-handle-acting as-a-raw-chicken-leg.

I swear my coffee tastes a little different than normal.
Less germy, maybe.

Still, my cup runneth over…into my mouth. Or onto the floor. I’m always spilling it…either way, time for refill. Or as I prefer to call it, another brain infusion.

———————-
*Domestica (tm) is one of my past websites, which i intend to resurrect at some point in the near future.

"It only takes a straw, a last straw, to break a brittle back. Trouble is, you can never predict when that last straw will fall, nor whether your back can stand it."

#silverlinings you didn't have time for your wife, your husband, your kids, your friends, your housework, your art, your hobbies, those phone calls, that stack of books you want to read...now you do.

GOOD!! put him UNDER the jail.

Okay, i don't know how many times a day I'll have to say this: YOU cannot remove him, THEY will not remove him. It takes #Pence and a majority of the cabinet to do it. Stop wasting your breath and instead hang on until November and #VoteThemAllOut

The President just congratulated himself for potentially 100-200,000 deaths

We need to remove him right now

Rats are taking over the empty streets in New Orleans in search of food during coronavirus pandemic.