For our first wedding anniversary, Melissa and I went to Onyx cave in Eureka Springs. Heading out, we were, as usual, watching for good pictures, our cameras at the ready, as I steered the Avalanche (whom we lovingly call Ava Lanche, as in French style Launch-SHAY. She is like another one of our pets.) 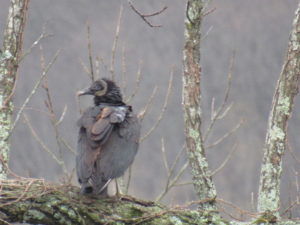 Just down the road on Highway 23, we stopped to take photos of a tree full of turkey vultures. Creepy and wonderful. 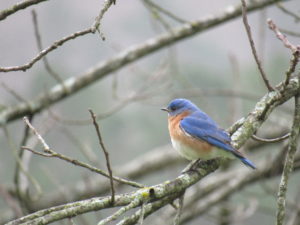 This was balanced by a precious little bluebird Melissa captured nearby. But not a turkey bluebird.

We were starving, but thought we’d just stop somewhere along the way to eat. Problem with that is, when you’re in some of the rural areas, there is no food for miles, unless you’re willing to kill it and skin it yourself. I was not. I can’t imagine a turkey vulture tasting like anything good. My miscalculation meant we would press on toward the cave, hoping they’d have a cafe.

Enjoying the scenic little road, we both noticed a really 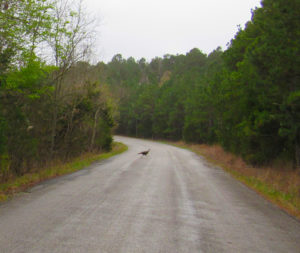 large bird along the woodline ahead. I slowed the truck to a crawl and finally stopped, as Melissa said there! I took a couple of blind shots, as the sun was in my eyes and on the viewing screen, and my glasses wereÂ in just the wrong position to see it. She informed me it crossed the road, even though i didn’t see it. Luckily, one of myÂ quick shotsÂ actually caught it as it crossed the road. A very large turkey, ironically enough, since we’d already seen turkey vultures. I was tempted to make that our lunch, but again, not unless we were stranded in the wilderness and it was absolutely necessary. But apparently, just like chickens, turkeys also cross the road just to get to the other side.

Anyway, we found Onyx Cave, and realized they didn’t have a cafe or snacks, and we were both so hungry we were in pain, so we opted to drive back out and stop at the first place that was open.

Back along the winding bucolic road, Melissa suddenly whipped her head toward the window, and said, “What the hell was that?! Stop! Stop!”

I had this moment where I thought (nay, hoped) that she had spotted Bigfoot. Not that I believe in that sort of thing, but I’d be delighted to be the first one to get a really good picture, for once. (I had a really good time writing a Bigfoot sighting scene in Also Known as Sleepy Cat Peak.)

Anyway, no, regrettably, it wasn’t Bigfoot. She jumped out of Ava as I put her in park and followed. Flipping the cap off her camera lens, and hitting the power button as she hurried back the way we came on the road, she said whatever she saw was white. I countered in my head that maybe it was a Yeti, then. A Yeti who had wandered far away from its natural habitat. She added that it darted into the forest and up a tree. I was sure then it wasn’t a Yeti, either. I seriously doubt a Yeti could dart up a tree. And I suspect Yetis don’t dart. 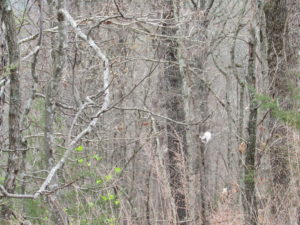 Either way, white animals are just not commonly seen in the woods. Â I started snapping pictures in that general direction, just like I always do, in case IÂ miss the good shot, I’ll at least maybe capture something I can enlarge later. It happened with the turkey earlier, so, hey.

What IÂ saw was just a slight puffy white color clinging to the side of a tree. My rational/skeptical mind told me it might just be a wayward plastic sack that some wretched litterbug had the audacity to sully the landscape with. But as we got closer, I heard her urgent whisper: “It’s a squirrel!” A white squirrel. 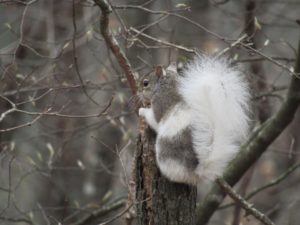 I wondered if it was rare in general, or just rare for us. I had never seen one my whole life. Melissa got the best picture of it. Sort of perfect, really.

It finally scampered off and smiling, we got back in Ava feeling elated. This traveling-around-taking-pictures thing was really a whole lot of fun. We talked about how many other things we were gong to see and experience when we get on the road, soon.

The sudden pitstop was well-worth delaying our abject hunger. 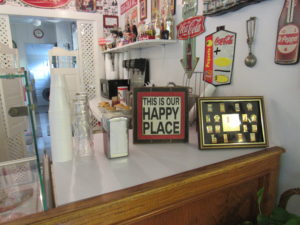 Our stomachs gurgling amid our complaints, we continued out to Highway 23 toward Eureka-proper, and decided we’d stop at the first open restaurant. That happened to be the bright yellow building just inside the outskirts of town by the train station, called Ice Cream Delights. A charming, retro ice cream 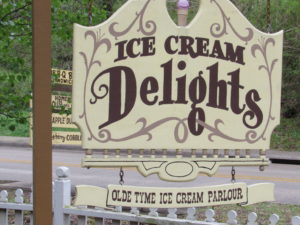 parlor. We had delicious barbecue sandwiches.

The nice gentleman who owned the shop dashed our dreams of zoological discovery, and informed us that white squirrels weren’t that uncommon here, which IÂ didn’t know.

But there was a 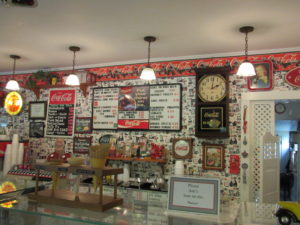 He said the Crescent Hotel apparently brought a bunch of white squirrels in, maybe to bolster their image as a haunted hotel, and then the little critters bred with the local squirrels and that’s why there are some that are two colors. It was still a really exciting experience, notwithstanding their commonality.

At the parlour, we took a seat near another couple, and started chatting. He worked for National Geographic, (the logo was actually on the shirt he was wearing). We had a pleasant chat about this 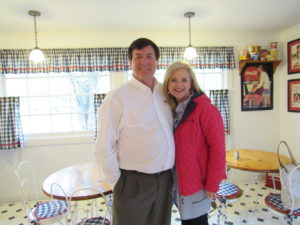 and that, andÂ at one point he shared aÂ story from one of his colleagues, a National Geographic Explorer namedÂ Andres Ruzo, who discovered a “boiling river” in the Amazon. Ruzo spoke of how he was told by an indigenous tribe member to walk barefoot in the area, and the explorer, in a very un-explorer type way, didn’t feel okay about that. He should have listened, because the ground melted his shoe to his foot. Seems if you goÂ barefoot in that region, you know where to walk 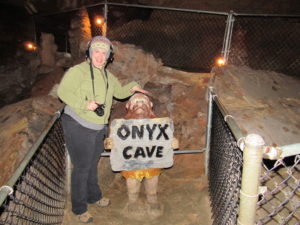 because your feet will sense the heat, and tell you where to go safely. But with shoesÂ on, not so much. Sometimes the counter-intuitive is actually the right thing to do.Â Ruzo did a TED talk about it. Pretty amazing stuff.

We never did think to get the names of this nice couple. I made a mental note to start doing that, since we will be traveling all around soon. I did manage to get them to pose for a picture, though. 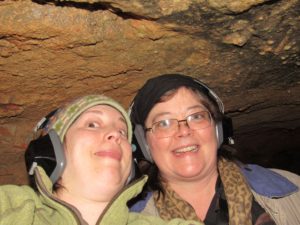 After lunch, we headed back to Onyx Cave and did the self-guided tour, and bought a few things from the gift shop. I picked out a carved crystal shaped like a white squirrel–for obvious reasons. Perfect.

Later, we drove over to Cafe Amore, where we ate at our 1 year (meeting) anniversary, which is the same day as our wedding anniversary.

We love chef/owner Katherine and her wife, realtor, Amy Jane. A sort of power-couple in Eureka Springs.

Everyone there is always so friendly and the food, as usual 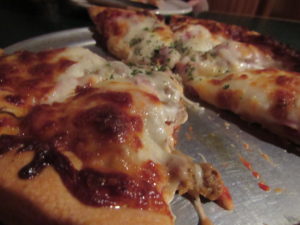 , was delicious. We had a meat-lover’s pizza, because that’sÂ the traditional meal for a first wedding anniversary (right?).

While chatting with one of the waiters about our day, we mentioned we went to Onyx Cave. He asked how we liked it, with a bit of a frown. Seems he found the experience a bit anti-climactic.

Well, it wasn’t mind-boggling, no. It was a cave. But I 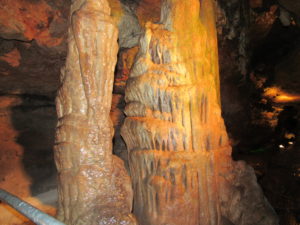 imagine it was because the cave was dark. Imagine, a cave being dark.Â How inconvenient.

I wonder why they don’t light up the caves more. Would make more sense. But regardless, we did get some pretty pictures. And I think that sometimes maybe we are desensitized to the beauty and wonder of nature, because we’ve watched so many extreme things on television. It takes a lot, these days to surprise or delight us. But if you’re able to look closely and just pay attention, it’s often wondrous enough all on its own.

But again, the cave was dark. We would have taken advantage of that, but we understood there were cameras. Most of my life is on the Internet, but I don’t think I want one of these new experiences to be revenge-porn.

"The truth hurts, and some individuals will always be able to choose any mitigation over the often harsh verities of existence."

The good writer seems to be writing about himself, but has his eye always on that thread of the Universe which runs through himself and all things. ~ Ralph Waldo Emerson