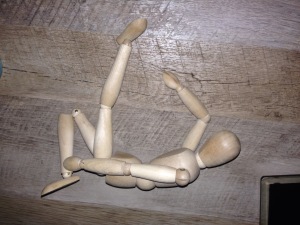 Sore today. Took a fall while leaf-blowing on the back patio yesterday. My foot slid out of my nurse’s clog, (yes I know, not outside yard-working shoes, but hey, they’re insanely comfortable) and I bent my ankle over, then fell, landing on my opposite knee, and both hands on the patio stones. The leaf blower landed in the pond. My knee, my foot/ankle, both wrists and even my left shoulder joint (a recurring issue) were screwed.

(It’s funny, how something like that happens so fast, you sort of wake up on the ground and have to use your memory to figure out what just happened).

The first thing I did, of course, was look around to see if any of the neighbors had seen me. No adult wants to be seen falling down. I resisted the urge to jump up and do a gymnastics stance, with my arms in the air, in anticipation of those score cards going up.
9.8â€¦.9.5â€¦4.2 (there’s always one bastard in the judge’s pool).

I think it’s quite funny when adults fall down, but the degree of humor is predicated on whether or not it’s me or someone else doing the falling.

Melissa turned around from raking and saw me sitting there, as though I had just inexplicably sat down–perhaps suddenly exhausted from standing about holding the little leaf blower. Then I looked up at her and said, “I fell.”

She came rushing over and checked me out, and I said, “Go unplug the leaf Â before we have an 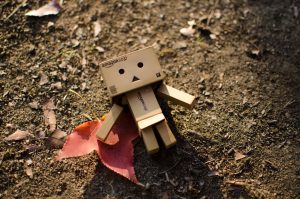 electrical fire and ruin it.” She did, and came back to help me up, and inside and then ordered me to the sofa so she could apply ice packs on the offended parts while i caught up on Rachel Maddow recordings.

It made me feel old. It’s not as though I fell from the roof of the house. I just fell from the deck, one step down to the patio. I mean, TODDLERS fall down all the time, and even if they cry, they don’t really get hurt. I suspect (and hope) it has something to do with the laws of inertia, or the size of the falling object, and it’s weight (no wisecracks). Perhaps Lisa Stafford and her science-mind can WEIGH IN on this one.

With a bit more thought, I realized Newton’s first law of motion is often stated as, *An object at rest stays at rest and an object in motion stays in motion with the same speed and in the same direction unless acted upon by an unbalanced force.* I suppose I was the unbalanced force, but I acted upon myself. But then, Newton’s Second Law of motion is *all objects free fall at the same rate regardless of their mass.* So that would mean if a toddler didn’t get hurt, I shouldn’t either. I’m rationalizing myself into a very embarrassing corner, here.

Two cannibals are having dinner and one says to the other, "You know, I don't like your publisher." The other cannibal says, "Okay, then just eat the noodles." ~author unknown

gastronome GAS-truh-nohm noun: A connoisseur of good food and drink.

â€œFind your own voice. Find your own rules. Find a way of measuring success thatâ€™s more about freedom and fulfillment rather than page-views and analytics. Page-views mean nothing a year later, but the words youâ€™ve put together may stand and affect others for a lifetime.â€ ~ Jenny Lawson, 15 things you must absolutely know about social media or your face will melt off and get eaten by goats

After many months of not being able to write, I seem to have a spark again. It's a #dystopian #apocalyptic story of undetermined length. What do YOU think is causing this? Moving my home office to the sun room with windows? or renewing my RX for #Xanax ? #writinglife #Excerpt