The Cast of characters:

Giz
(AKA Gizmo, Gizzard the Lizard, Gizzy-Giz, and of course, his Russian name, Gizimov Runninov). Adopted from shelter in 1998. Half spaniel, half chihuahua, and all the way sweet and nerdy. If he was a human he’d be in therapy and wear pocket protectors.He eats anything i give him and steals the rest. 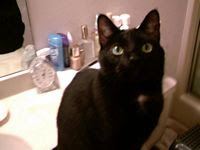 Stormy
(AKA the Stormster, the Storminator, Stormy-storm). Matriarch of the LS branch of my extended family. Rescued from a thunderstorm on the Gulf Coast outside a casino, and only later in life learning to share her Mommy with other fur-children and humans. Stormy is a vegetarian and prefers fresh water from the tap.

Poe
(AKA Poe Ditty Super Kitty, Poe-Poe Headed Cat-Cat) Purchased by us at a flea market (they were fresh out of fleas) and embraced by stormy only after much resistance a little over a year ago. Poe was once the cute kitty, and now has grown and is more intense, allowing Stormy to return to her kitten-behavior. Poe has fallen in love with her human, LS, since LS and I obtained separate living quarters. Poe gazes at her lovingly, hugs her head. She is carnivorous.

Poe and Stormy take shifts getting attention from Mommy. Stormy gets her during the day, and Poe gets her at night. Any deviation from this daytime ownership incites a barrage of hissing and chasing behavior on Stormy’s part. 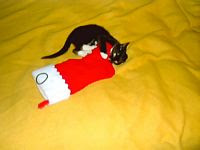 It is Christmas day at her Godmommy’s house. Shoes has lost patience with the hissing occupants of this condo, and is now alternately chasing them, running up and tagging them and running away. Intermittently, she becomes an Olympic hockey player with a wad of paper, and periodically visits my thick house socks to wrestle with my feet, run up the length of my body and grab my head. She is a space invader of the finest breed, and Stormy and Poe do not appreciate it one little bit.

I even brought Giz over too, and he is a little put off. It’s not his house, and when I gave him his bowl of food, he set about guarding it like the family jewels–standing over it, a canine vulture, staring at it like it might move. He looks a little mental when he does that. Shoes also makes pit-stops at his bowl to sniff his kibble and thrust her furry arms into it and run away. He then goes over and counts his kibbles to make sure she has not taken one of them.

The two of them have bonded ever since I left them alone together for 24 hours. When I returned to my apartment, Shoes was brashly leaping from the bed, landing on top of Giz, and riding him, while she bit the fleshy folds of his neck. He would shake her off, and she would wrap her little kitty arms around his neck, bat at his face and ears, and try to chew on his feet. He has been admirably tolerant to this behavior, and even seems to be enjoying it.

Nanny is doing the usual: waddling around in her diaper, smacking her toothless mouth, making hoo-hoo noises, or sleeping in a wad of blankets near the fainting couch.

So, here, on this, her second visit to Godmommy’s house to mix and mingle with her pseudo-siblings, she is still not met with a welcome mat. But this visit has none of the cowering under the futon. This visit seems to be without restraint. She continues to chase the two older cats, moving blithely into their space, ignoring the parameters. There is a repetitive hissing followed by the pitter-pat of a running cat. She is actually chasing them, and they are so mad.

Publishing a book is very much like being naked in public. So it’s difficult not to take it personally, when someone makes a comment on it.

—Andre Dubus III, WD (this quote is from an interview with Dubus in our July/August 2012 issue)

"For a moment, nothing happened. Then, after a second or so, nothing continued to happen." ~Douglas Adams