↓
Home→TRAVEL→Driving→Going to Denver Because You’re Dead (1)

Readers of this blog and those who know me personally are aware that recent events are not only pivotal in my life, but a necessary means of maintaining (or perhaps retrieving) my sanity.

I knew that moving would be stressful–I added it up, and I’ve done it exactly 42 times. That makes me somewhat of an expert. Yet, expertise did not make a single one of these moves “pleasant.” It’s just not the nature of the beast.

The only difference this time was that I wanted it more than any other move, planned for it longer, and sacrificed more to make it happen…oh, and I actually paid other people (for the first time ever) to do the loading and unloading. That still didn’t seem to prevent the pain and suffering physically, I assume because I had just gotten over my ruptured disc, and there was inevitably a thousand things to do and no one but me to get them done. For these reasons, I imagined that the drive would be the easy part. Boy was I wrong. Below are excerpts from my Facebook mobile posts, as well as some commentary before, during and after.

Jae Baeli: I got a dash/window mount cradle for my iPhone so I can be both hands free and also take “road pictures”…I will be posting photo diary along the way just for fun July 30 at 3:42pm Ę

Tanya Gotcher: This ought to be interesting!!!!

Jae Baeli: well i welcome all visitors. unless you’re certifiably insane, a drug user, or a drunk. so i think you’re good to go 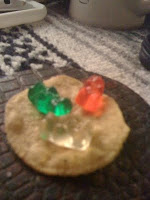 July 30
Ok. Be glad when Justi gets here to take me to lunch . these stale tortillas topped with gummi bears just aren’t making me happy.

Tammy Johnson: High blood sugar always helps and it’s good to see that you two recognized this and had fried ice cream…….ancient Chinese secret…..Looking forward to your road adventures my friend…..Love you!

Before leaving town, my best friend, Justi, took me to lunch at La Fajitas. She gave me this beautiful White Gold and Aquamarine ring. Now every time i look at it, I’ll be reminded that i have the best best friend in the world. 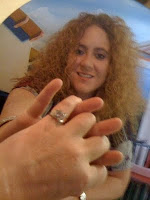 After our meal, Justi flagged down the waiter and asked, “What do you have for dessert?”

“Do you have anything else?”

And he was off to fetch the ice cream he didn’t have .

Then she said, “Um, didn’t he say he didn’t have anything else? “

In a tone laced with that sarcasm i love so much, she said under her breath, “How about some fried ice cream-flavored flan?”

And I laughed. I love her. 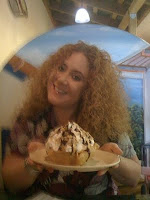 Jae Baeli: I could not handle a maudlin goodbye with Justi. So we said “see you later, be careful. I love you.” and then just left it before the waterworks started. July 30 at 4:28pm Ę 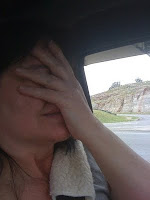 Got to the U-haul place and was informed that my trailer was not there. Somehow the information had not been transferred. This, after I stopped by twice to make sure all was okay. She supposedly had put in the request, but it had not been handled. She tried to make it sound like it was the other person’s fault. But when you know someone had an appointment to come in at a certain time to pick up a trailer, don’t you notice that the trailer isn’t there? I swear.

So, it gets worse. She tells me i have to go pick up the trailer in Oklahoma–about a 60 mile drive, one-way. Without another option, i drive there, and have hell finding the place, as the directions are really bad and there seem to be two addresses the same and only one is the one i need.

Finally i find it and then discover they don’t have a dolly for me there. I’ll have to get that at some other U-Haul back my direction. And then there’s no one to lift that trailer onto my hitch. So i have to do it with her and her 10 year old son. I’m sure my newly healed herniated disc appreciated that.

All this put me 8 hours behind schedule because i had to reschedule the loaders for later in the afternoon. Wed at 7:08pm

Jae Baeli: I know. I got a grip. I refuse to let that one thing screw up my happy happy joy joy.

Okay, so then the movers arrive later in the day, and it becomes abundantly clear that neither of them knew thing-one about moving. I had to give strict instructions on how to stack the tubs, with the heaviest in the front of the trailer and on the bottom.

Then when they got to my TV–that massive, leaden box i wish i could exchange for a massive flat screen–this was a whole new exercise in futility. I had to explain to put it heavy-side against the dolly, with it PADDED SO THE SCREEN WOULD NOT BE DAMAGED. That it had to be on its side to fit through the door, etc. Then he backed through the front door and pulled the Dolly with the TV on it toward the step and lets it just drop down. BAM! I stopped him immediately and explained that he had to push it TOWARD the drop, and control the descent, and let it slide along the runners against the step. Ease it down gently.

I was afraid the TV might have been damaged beyond repair but couldn’t deal with it then. They were very slow, and when they got all the heavy stuff in, and hauled some stuff to the dumpster, i just told them i could do the rest. I didn’t want to pay them for that extra time to destroy something else.

They had agreed to $20 a piece, but i gave them $60. Not sure why i gave them more. I guess, because i felt guilty being so intolerant and judgmental. It was a pay off to my conscience.

After that, i spent the entire night not sleeping–no–but cleaning and loading the rest of the stuff. Amazing how much is left to do after a three-story house is empty. I flirted with re-injury of my disc as well as doing that to a few more. I was exhausted, but had no choice. Again, it’s always just me. And it always has to get done. By me. 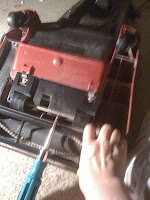 Jae Baeli: Had nap now back to work. have to fix the vacuum. belt came off. I’m near final stages of pack n clean. I want to be done! My cats are starting to freak out because the tallest, softest object in the room is ME.

I’m like that Dyson guy when he says in that British accent: “I just think things ought to work properly.” WHy is it that a vacuum belt breaks and/or stops working because it gets clogged with things it was designed to handle? And why can’t it refrain from this clogging while i am working my ass off to get things done and don’t need another problem to deal 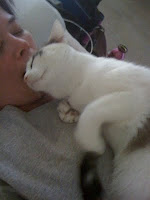 I take a time-out and Monkey is immediately on my chest, as she still believes she weighs 10 ounces. She likes to put her head on my lips so i will kiss her. Love that cat. 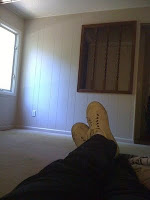 Jae Baeli: I am lying on the airbed moaning…And not in a good way.

I had to help with the stuff on the dolly bc mover-guy didn’t quite understand how to do it. Hope my tv works when I get to co. If it doesn’t, I guess I’ll just make Erin entertain me … 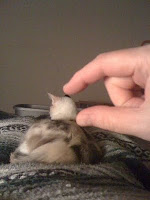 Thought i had lost Monkey when the landlord came to inspect. Freaked me out. I was sick. Then i realized she had been in the room the whole 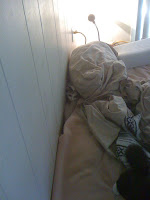 See her by the wall beneath the covers?

Jae Baeli: This feels like every other move, now. Pain. Exhaustion. Frustration. But this place is almost done. If my landlord doesn’t give me my deposit back I’ll have to kill him.

Tammy Johnson: Remember, friends help you hide the body! Good morning sunshine!! Today’s the day! Woohoo you!!
Jae Baeli: Yes I’m trying to focus on leaving and how good that feels. I am dog tired tho. Landlord will be back with final papers and dep refund 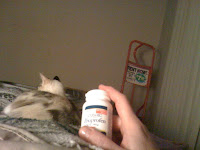 chk in a minute.

Then I’m taking a nap. And more ibuprofen

c’mon baby, let’s get out of this town. I got a full tank of gas and the moonroof down… Baby you can text while I drive…

Attachment Disorder group support meeting. When it's over: "I don't wanna go!" "Me either!" "Come home with me." "Okay."

ŌĆ£In religion and politics peopleŌĆÖs beliefs and convictions are in almost every case gotten at second-hand, and without examination, from authorities who have not themselves examined the questions at issue but have taken them at second-hand from other non-examiners, whose opinions about them were not worth a brass farthing.ŌĆØ ~ Mark Twain

If we are really looking for a strong candidate to take on Trump, why donŌĆÖt we just nominate Hillary Clinton?