I sat up in bed, suddenly awake, my pulse pushing at my neck. I did hear the door. The shlink of the deadbolt, to be precise.

Someone had broken in. 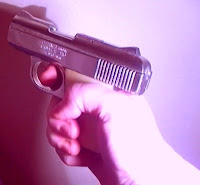 I reached down to the space between my bed and nightstand for the automatic I kept there. Thumbing the safety off, I crept out of bed to investigate. Halfway down the hall, I realized I didn’t have my glasses on. I worried I would not be able to see who it was. I’d hate to shoot my best friend who surprised me with a midnight visit. But then, my best friend doesn’t visit me at midnight without calling first, and she certainly wouldn’t let herself in, unless I left the door unlocked. I gave her a key, but she can’t seem to identify it amid the other mélange of keys on her keyring-cum-lethal weapon. I was wishing I had her keyring right about now. It might do more damage to a prowler than this .25 slug. I’ve heard countless tales of small handgun wounds merely pissing the intruder off so that if they had no intention of hurting you, they would, after that.

Okay, so it wasn’t going to be my best friend. But I would see a blurred figure, only, without my glasses, and that might not be the ideal situation. Shoot first, ask questions later?

Too late. I was down the stairs and staring at the front door.

It was coming from the bathroom.

The prowler had picked my lock, secured the deadbolt after coming inside, and then decided to have a potty break before attacking me in my sleep?

Maybe he was a rapist, and he was in there putting on a condom.

A condom? That’s rude. I don’t have any communicable diseases. Now I’m frightened, angry, and insulted, too.

As I peeked around the corner I saw the bathroom door open and the light still off. He could still be in there, though. Maybe he heard me coming down the stairs. He wouldn’t have, if my landlord would ever fix all those squeaking boards in the floor.

My attention back on the bathroom doorway, I lifted the pistol with one hand, and flipped on the hall light with the other.

Stepping into the bathroom, I heard the sound again, and looked up. I realized it was the exhaust fan on the roof. Squeaking in the wind. It sounded uncannily like the shlink of a deadbolt.

Sighing, I started back into the hall. After all that creeping around, with my heart pounding in my ears, I was so disappointed.

I went next door and shot my neighbor.

I mean, I was already up.

And he DOES play his stereo too loud.

———–
*DISCLAIMER: I didn’t really shoot my neighbor.
*ADDENDUM: Smothered him with a pillow.

â€œThe road to hell is paved with works-in-progress.â€ ~Philip Roth

People act like they want something real in a relationship, and then when you give it to them, they say it's too authentic.
~ Author Redacted