↓
Home→HOLIDAYS & OCCASIONS→anniversary→Happy Effing Anniversary
Today would have been our one year anniversary.

D. came by at 9:30 with police escort to get some things. Officers were very nice. He said “Kelli?”

I said, “Yes, but I go by Jae.”
He introduced himself but now I can’t remember his name. I shook his hand in

introduction. He said the lady over there needed.…and then I couldn’t hear what he was saying because when I looked across the street, there she was, parked in her truck. I had a little palpitation and felt myself step backward.They stepped in and I explained that I only had to drop off at storage what was in the U-haul today. I had wanted to leave today, but didn’t have enough money for hotel for two nights. Had to wait forÂ Friday when my check went into the bank. And then this stuff they could see, I would load into my vehicle on Thursday, and then go to court, and after that I was going straight to a hotel for two months until my permanent place was ready. So I would be out by Thursday, and I just wanted the opportunity to do that, and it was really hard because I had a million things to deal with and moving by myself was very difficult.
I retrieved her toothbrush and she complained that it was the Sonicare. I told them I bought that, and she had this other set before I moved in, and so that was hers. He nixed her argument and said we weren’t going to get into that now. Just take that one.
Then she wanted her reading glasses. I got her reading glasses, sunglasses, Daytimer, old cell phone in a box and handed it to cops. She complained that her eyeglasses weren’t in there, and I said I put them in the box, maybe they fell out–and checked. Then the officer found them on the chair near where I had the box. I gave them to him.

Then she asked for her dentures and I got them, didn’t know where the case was. He wouldn’t take them because they weren’t in a container. I put them on a napkin, gave him that.

Then she asked where her gun was, I handed him the pieces of her service pistol, which was broken because she broke it. Officers saw it on the bedroom floor that night. This cop couldn’t give gun to her. Then she asked for her .357 and I said I didn’t have it, it was in her truck last I saw it; she said it wasn’t in the truck and accused me of taking it. I said I had moved it from beside her seat shortly before the incident and under the passenger seat, to PROTECT her, and then when I felt it was okay, I put it back between her seat and console where it was before. She made like I had stolen her gun and might press charges. geez. I told officers I had no interest in her guns. He asked about the other guns. I said the only other location I was aware of was a gun cabinet with rifles. She made some comment about she was afraid I’d use one of the guns because I was suicidal. I sort of laughed and grimaced at the same time. I could tell she was trying to incriminate me as unstable.

I said, “I’m not suicidal.Â I value my life, which is why I’m removing myself from this situation. I don’t care about your guns, except that they don’t hurt me.”The officer said that he didn’t want to have to search her vehicle because she was not supposed to have guns during this Protection Order and she would be arrested. She said she looked and it wasn’t in her truck. I said I didn’t know where it was now, I only knew the last time I saw it, I had moved it back to between her seat — ironically, because I was trying to protect her from herself a short time before that, when there was another upheaval. I said she had driven away that night with it, and I had been afraid that she would use it to kill herself.She made some other stupid comment and I said that since she was drunk that night, maybe she misplaced it herself. I told the cop I don’t know where it was now, didn’t care. Everything that is hers is still where she left it.

So then I needed to tell her about storage,Â  but she interrupted me with some other thing about her stuff, and not being able to get toÂ it. I said I had to change the gate code and lock to protect myself and my belongings, because I had to store things for two months and I didn’t want her to have access to the things I needed to protect…I continued, and she interrupted again, and I said, “Don’t make this worse than it already is. I am trying to be fair and still take care of myself.” She interrupted again with some argument, and I addressed the officer, “Okay, I’m trying to give her some information that is STRICTLY for her benefit, but she won’t let me finish.” So I addressed the officer– that I had spoken to the office girl at storage, (got choked up and had trouble continuing for a few seconds, still crying) and told him that when I get my things out to move to a permanent place in June, I would leave her things and close the door and she could contact D. to come get her belongings then. I had not harmed her things, will not harm her things, I don’t want trouble, I just want to get out, but have only had a few days to do all this myself and hundred other things to deal with on top of being stressed and sad about this whole thing. Tears were streaming down my face. He said he understood. 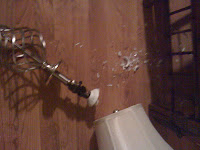 Then she said, “Jae, why did you break all those things in the living room?”

I felt my blood pressure shoot up. I said “OH MY GOD! D., YOU trashed all that stuff Sunday night during your meltdown, threw all kinds of things around and eventually started throwing things at ME. Don’t try to accuse me of things I didn’t do. Especially when YOU did them!”

Then she asked for and I got her a nice shirt to wear to court. In the bedroom, I told the officer that I didn’t have any desire to take anything of hers, I just needed to get out of this situation and feel safe. I said she has been distorting things and hasn’t been able to think clearly or communicate clearly for months. I didn’t want her to start trying to trump up charges on me, I was the one victimized here, not her. He was understanding, and said I appeared genuine.

Then they were leaving, and I just reiterated I wanted to feel safe and when I was going to be out, and I was doing my best to get out as soon as possible. All I wanted for her was that she get the help she needed, counseling, substance abuseÂ help, and that I just wanted to get on with my life.Â He commiserated that he knew it was difficult and he understood and it seemed that’s exactly how I was about it, no problem.

Then they all went to their vehicles. D. sees Bev, neighbor across street, who says something to her from the door, and D. goes over there, about to go in but cops got out of the car again because she was supposed to leave. She walked over and said something to them and began to walk back to Bev, and so I came out of the house to talk to the cops–parked across the street. They saw me and got out to be between us and I told them “please don’t leave me here alone with her.” They said they wouldn’t. She was told to get back in her truck, and she paused at her door,Â  and said “Jae, I just wanted to say I’m sorry and I love you.” I just sighed and started to walk away. Leaving it at that. But then she said something else and I can’t recall, but it sort of ruined the previous sentiment. I said “D., I just want you to go on with your life and get help, and I want to get on with mine. You have to understand, I am afraid of you.”

I went back in, and then watched them all leave, while I was still crying and just sobbed harder. Then I felt sick and went to throw up.

"I believe we're on the cusp of Critical Mass. Like the Cuban Missile Crisis. What We The People do at this juncture might mean the difference between becoming a fascist state & saving our Country from the brink of annihilation. Why is it even possible that some will not vote?"

â€œThere is only one plotâ€”things are not what they seem.â€

Sometimes the facts in my head get bored and decide to take a walk in my mouth. Frequently this is a bad thing. ~ S. Westerfeld