↓
Home→ESOTERICA→Akashic Record→Kindred Molecules, Deja Vu, and Noosphere
There are people we meet who seem to be immediately familiar…these familiars are somewhat vexing, in that it often doesn’t make much sense why you are drawn to certain people and feel like they are part of your molecules, somehow. 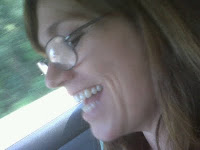 Whatever that little cosmic thing is that seems to be going on somewhere under the radar…I seriously believe in the concept of Kindreds. I rarely have that sense with people, but I have been enjoying that connection with a new one–Tanya. I feel a connection with Tanya that defies logic. We haven’t seen each other in 30 years. But I have seen her, 30 years ago. In High School. She’s in the back of my consciousness somewhere. And even then, I was drawn to her, and my immature brain may have completely misunderstood what that connection was. So combine that with the current interaction we’ve had in phone calls, emails, texting, photos…and maybe our brains just fill in those extra parts where they are supposed to go. The brain does this with memories as a matter of course, but I wonder if it can do it on this other level, where the stuff that gets filled in isn’t memory, unless it’s cellular or on some cosmic level we have yet to understand…
She recently dreamed she and I were talking and I was wearing a blue striped shirt. She asked if I had one. I sent her a picture of the only one I owned, and she said that was just like the one in the dream. She thought it was freaky and spoke of other times when she has dreamed things and they appeared later in her life…felt a little like deja vu when we have moments like that, she said. And I agree that it’s odd–when we seem to tap into something beyond our normal comprehension.
My friend Justice believes in the collective consciousness, and she says that’s where it comes from. I like the idea of the Collective Consciousness (AKA Noosphere, Universal Mind, Cosmic Consciousness, Collective Unconscious, Akashic Record, etc). It’s similar to the concepts I’ve been exploring in my book, Quintessence… although not about this specifically, it is about the idea of Alternate Realities, the Unified Field, and what if DNA can find copies of itself in other alternate realities. What if the same is true for Kindred Molecules? What if there’s some beacon that can pick these things up, that science has not discovered yet? What can we really know for sure about the Noosphere? I don’t know. But fascinating to think about. 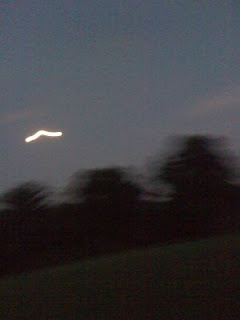 Back to deja vu. I do think that it falls into a category of neuroscience, most of the time–people believe essentially what they need or want to believe, and it gets embellished until it’s an outright lie. I’ve been guilty of that. I realized this most recently in an experience while walking on a golf course on the evening of 4th of July. In realizing that I had taken an accidental picture that looked mysterious, my brain started on that tangent and I wondered if I took a bunch of those types of photos, and then posted a blog with a bunch of B.S. in it, packaged to look like the real thing–how many people would fall for it. About 75% FELL FOR IT. You know who fell for it? The Christian, religious and/or highly spiritual people. They already have the tendency well in place, you see, to swallow whatever seems mysterious as something… MYSTERIOUS. Which means they are ripe for the picking, and don’t use their reason enough.

I am reading this book (one of many on my nightstand that I read in turns) called The ‘God’ Part of the Brain. In it, the author explains his quest for his own cosmology (much like my cosmology book, but a different genre) and apparently, there is something about the human brain that inherently wants to believe in things that are not true.One example, from just today. Each time I got up from my desk to go refill my coffee or some other household errand in another room, I noticed that the light was on in my closet. I had turned it off before that. This happened repeatedly, and I had this little moment…that moment that happens in the primitive portions of our brains that wants the mysterious to stay mysterious… wherein I ALMOST thought there was something MYSTERIOUS happening. Then my rational mind kicked in and I reminded myself of how I had gone into that closet about 20 times that day, since it’s as much storage as closet. I had just not consciously noticed leaving the light on each time. I only notice it when I get up and am facing the open door and see the light in this otherwise dim room. Contrast is part of that explanation. I don’t notice leaving it on, because I’m walking OUT of the light. My eyes are sensitive to light, and I only notice when it hits my eyes, and they have to adjust. Perfectly rational, plausible, and HONEST. Nothing mysterious there. 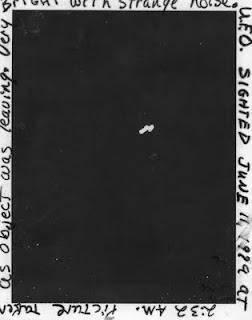 In storage recently, I came across another photo that spoke to this very concept, and used myself as the guinea pig. I took a photo of a UFO when I was a kid, and when I revisited this photo and the story surrounding it, realized I had fabricated the whole thing. I WANTED TO SEE A UFO and so I saw one. But just like the photos of the light worms on the golf course, it was created by moving the camera while taking a picture, resulting in the dragging of a light source into a glowing object. It took a great deal of honesty to admit that to myself. It had started as a weird photo I didn’t understand, and it had then morphed into the thought of UFO’s, and then, over the years, I continued to lie to myself in increments, to the point where I believed it. The memory was so distant– and I hadn’t seen the photo in so long. Finding the photo in storage, it reiterated the situation with the post about the glowing night worms. This photo had the same glowing effect on it. And it was not due to something in the sky. It was an error in the photography, and a glitch in my human software. The glitch that has us believing the lies we tell ourselves. Until we can all nip that in the bud before 30 years go by–like the minute we do it–we will always be subject to the machination of the psyche, and all it’s variant bad sectors on the Human Hard Disk. What was I talking about? Oh yeah. Deja Vu. (I have had just as many experiences with what (I think George Carlin) called Vuja De–which is the sensation that no one else has ever had this experience, ever. lol). There are many things that science has yet to explain… or prove…one of those is the concept of a Collective Consciousness.
Justice believes that’s where she gets her psychic information. I can’t say. All I know is, she seems to have this gift for knowing things I can’t find any explanation for. So

yes. THAT’S a mystery. Science doesn’t know yet, what that’s about. I’ve had many experiences myself about knowing things I “shouldn’t” know. First memory of that which sticks with me is when I knew Elvis was dead before they announced it. I was sitting in the living room watching soaps (back when I had only 3 wrinkles in my brain, and didn’t know any better) and a bulletin came on with a little splash screen. Just a nondescript logo on the screen, Nothing else. I turned and called to my Female Parental Unit, who was in the kitchen, saying, “Mom! Elvis died!” She came rushing in, wiping her hands on a dish towel, and said “What?” About that time, the announcer came on…stuttering, “Elvis Presley…has…died…” I’m sure my mother didn’t know that my shock at that moment was not about the death of Elvis, but the realization that I knew about it a few seconds before they said anything.

And over the years, I have known other things. (As I’m sure many people have). Some simple, like knowing the phone was going to ring–I’d reach for it to answer, and realize it wasn’t ringing. And then it would ring in my hand. Or knowing what people were going to say in movie dialogue, and saying it right along with them, when I had never seen the movie.

I wonder if any of you have had this experience, or do it on a regular basis: you are listening to someone talk–whether on an audio book, on television, the radio, or in person–and in your mind, you are following along with them in perfect unison, as if they are talking from your head….I’m sure there is a scientific explanation for that, having to do with how the brain works….but i find it interesting…

Also–these other examples of connection–I’m sure many people have had this experience–I would think about Justi, and tell her, mentally, to call me, and within a few minutes, she would. I can’t explain those things, but it’s obvious there is something “out there” we don’t fully understand yet, and it does seem mysterious.

Anyway, I’m curious about my connection with Tanya, as I’ve rarely felt it with anyone else… It’s a different species….I’m not sure I can put my finger on it….she is an oddity. (I mean that in the most loving way…I’m an oddity, too). It’s like I feel I know her much like I know myself…maybe that’sÂ  just a load of malarkey. Maybe it’s just that we see eye to eye on so many things….and yet, that doesn’t make much sense; we’ve had two completely different life paths, and yet arrived at most of the same conclusions. Maybe we’re just a higher degree of kindred. But this is partly why I am so anxious to spend some face-time with her. I want to know what that’s all about.

I want to learn more about the noosphere.

"Good communication is less about saying what you mean, and more about defining what you say."