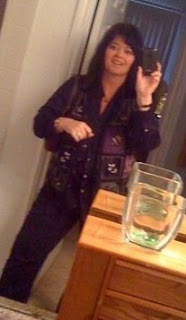 So my first First Fridays at Tracks.

I went, faithfully following my GPS, and watching the little pulsing blue dot that was me on the map, as I veered repeatedly from the route I was supposed to take. I’ve discovered that if I just drive straight shots through town, I do better. The Highway is confusing and I end up taking the wrong lane and having to circle back and start over.

Later I ran into Tina and her friend and spent a little time with them. Everyone wanted to steal my electronic cigarette. I must get some stock to sell. Or get a referral fee from the guy I send them to online…

Anyway, I have re-verification, now, that one cannot make friends at a nightclub. One must have friends first and go with them, or meet them there. Otherwise, you wind up the solitary creature holding up the East wall. So what do you do when you just moved and have few friends in the area? hang out with them, and make new ones as you can, outside the nightclub. I have spoken.

I went home at a respectable hour, and on the way, got a text from Rheana that she was at Tracks and was I still there? I turned around and went back. I wanted to see Rheana. I hadn’t seen her in years. And besides, i needed the practice driving around. 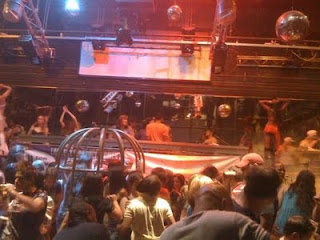 I was equal parts excited and uneasy. I am, after all, a recovered agoraphobe. I don’t think I’ve ever seen that many women–gay or otherwise- in one room at the same time. There must have been around a thousand of them. One person commented that it was “A slow night.” I was there a few hours and felt stupid, being alone.

While Rheana danced with her girlfriend, I stood aside and took a few pictures. A young woman sidled up next to me and started a conversation. After initial introductory small talk, she asked, “Do you live in Denver?” 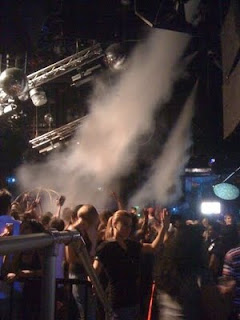 “Oh? Where did you move from?”

“Hell,” I said. She giggled, possibly because she didn’t believe me. I couldn’t bear to burst her bubble. There really were many hells to be had on earth.

“Are you a lesbian?” she asked next.

“Thank god,” I said, like the true atheist I also am.

“How old are you?” she wanted to know.

I hate that question. “How old do i look?”

She squinted at me in the strobing, pulsing lights. “Twenty nine.”

“Bless you, my child.” Kills me how everyone always thinks I’m younger. I guess I should not complain, since I’m smack dab in the middle of a mid-life crisis.

"Some people have goodness and merit buried deep inside and we glimpse it and see its value but ultimately it's covered by so much dirt that it's a 24/7 exercise in archaeology."

There is not enough love and kindness in the world to give any of it away to imaginary beings. ~ Friederich Nietzsche

Delicious. I wish our own leaders would treat #pence like the traitor he is. Kudos to #PrinceCharles #PenceSnub #PenceKnewEverything #ImpeachPence

Prince Charles showing us the proper way to greet a fascist like Mike Pence!🔥

Breaking news from MSNBC: Ted Cruz has been in contact with Trump and they are now demanding that Hunter Biden be called as witness and he's now more relevant than ever.

My question is why is a senator/juror in contact with POTUS during the trial?

TRANSLATION: "I am obstructing justice once again, and getting away with it in broad daylight. Heil Hitler."

#JusticeRoberts is part of the problem. I fear we are lost. The corruption runs too deep and wide. I'm baffled about how we recover our country again.

Sen. Lindsey Graham has spent considerably more time absent from the Senate chamber tonight than sitting in his seat. After leaving the floor for about 30 minutes, he returned for about 10 minutes and promptly left again — this time to the Republican cloak room. @jeffzeleny

I first met Mitch McConnell in 1978. He is about one thing - himself. He is far more dangerous than anyone else on the international or national political stage. He is the darkest side of the American Dream - ruthless, soulless, vindictive and cunning. @senatemajldr https://twitter.com/voxdotcom/status/1220043238901473280