↓
Home→PHILOSOPHY→honesty→Medical Professionals Were NOT Stunned

The sexually ambiguous humans among us are here to stay. Regarding the Oregon man, Thomas Beatie, who claims to be pregnant…

I suspected when I heard the headline that he either had a sex change or was a hermaphrodite AKA intersexed. Indeed, the man us 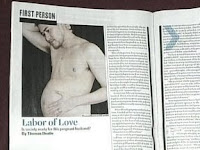 ed to be a woman. And he retained some of his female reproductive organs. He’s married to a woman.

But my first burning question was, who is the father? Did his wife also have a sex change–was she formerly a man, who retained some of HER male reproductive organs? So i had to go glance at a few paragraphs about the story.

I don’t know why everyone seems so shocked, Obviously, men can’t have babies. So you know right away this is being hyped. Neighbors have seen the man recently and swear he doesn’t look pregnant to them. Regardless, it was ridiculous for the British online paper, the Telegraph to print the headline “‘Pregnant man stuns medical profession.” I’m relatively certain that no medical professionals were stunned. Now, if he was biologically and completely a man, and they discovered he was pregnant, that would be stunning. The news media just can’t help but make the unsensational, sensational. I’m sure this was a deliberate decision made by he and his wife, since reports state she is infertile and they wanted to have a baby. Duh.

“Who wants to become a writer? And why? Because it’s the answer to everything. … It’s the streaming reason for living. To note, to pin down, to build up, to create, to be astonished at nothing, to cherish the oddities, to let nothing go down the drain, to make something, to make a great flower out of life, even if it’s a cactus.” ~Enid Bagnold

“Why do you want to shut out of your life any uneasiness, any misery, any depression, since after all you don't know what work these conditions are doing inside you? Why do you want to persecute yourself with the question of where all this is coming from and where it is going? Since you know, after all, that you are in the midst of transitions and you wished for nothing so much as to change. If there is anything unhealthy in your reactions, just bear in mind that sickness is the means by which an organism frees itself from what is alien; so one must simply help it to be sick, to have its whole sickness and to break out with it, since that is the way it gets better.” ~ Rainer Maria Rilke, Letters to a Young Poet

There are voters prepared to vote for this president who may only change their mind because of you. You may be the only thing that gets through. Not a Project Lincoln ad. Not a sassy tweet. Not a yard sign. Not a mailer. You.

It’s time to have the talk.

Here is the opening statement that we will never see in the #BreonnaTaylor case. Here is how a real prosecutor could have brought those killer cops to justice. #JusticeForBreonnaTaylor #BreonnaTaylorMatters #SayHerName https://twitter.com/GeorgetownLaw/status/1299338177866616833

What could justice for #BreonnaTaylor look like? As a former prosecutor, Georgetown Law's @LawProfButler says the evidence warrants reckless homicide charges against the police officers who killed her. He lays it out in this opening statement he'd give if prosecuting the case.

Let’s get it trending!
We need 500 replies with the hashtag #VoteHimOut