Mississippi just might be the first Circle of Hell. The heat and humidity here is oppressive, to say the least. I

can always get a derisive laugh out of locals when i say, “When’s it going to snow?” I admit, i had some preconceived notions about moving to a coastal area. Most of those notions were probably based on movies I’ve seen like Sleepless in Seattle.

Important distinction here: that’s the Pacific Northwest, this is the Southern Gulf. I’ve noticed that when people talk about living “bi-coastal,”they are obviously leaving out the THIRD coast. The U.S. is really tri-coastal. The Gulf Coast, however, is like the red-headed step-child.

I can’t speak to the appearance of the ocean on either West or East coast, but i can say that the Gulf of Mexico looks like one giant mud puddle. It certainly doesn’t appear as it does in movies. And there are no shells or other washed-up sea treasures on the beaches–no, they clean the

coastal sand with a big vacuum truck. So beach-combing is out.

Then there’s the Tern sanctuary area that you must avoid in the interest of preserving an endangered species.

And you can’t have your dog on the beach either. That will cost you a hefty fine

I had hoped to go floundering for the first time in my life, but roommate, who is a Mississippi Gulf Coast native, said it was awfully dangerous, since we would likely be accosted by bad men up to no good. 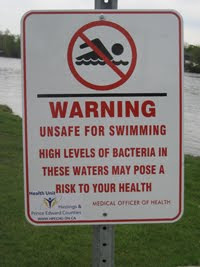 Even with all these obstacles aside, often the beaches are just plain CLOSED. Most often, “as a result of high bacteria levels.” We are told we will be notified when it is again safe for human contact. The good stuff about beaches, then, is not to be had.

Then there’s the threat of hurricanes. Obviously, not something one looks forward to, but even if no one is hurt and there is minimal property damage, there’s the power outages that leave you in sweltering triple-digit heat afterward for sometimes weeks. And if the roads are 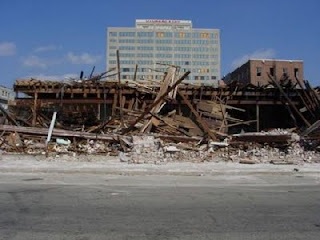 blocked near where you live due to debris, then all the hoodlums are likely to take advantage. Cops can’t get to you, you can’t leave, so you’re at the whim of any gang members or other undesirables who may want to enter your house and take whatever they want–including YOU.

To add to the negative column, there’s also an unrelenting collection of toads that croak so loud, it can drown out the TV.

Overall, Probably most bothersome are the fleas.

I’ve never in my life had so much trouble with flea infestation. About 3 times a day, i have to get down in the floor with my dog and pick fleas. Hundreds at a time. A few hours later, he’s scratching and whining like crazy again. Cats have them too. Nothing store-bought works. I’m about to try herbal and natural remedies next.

Not surprisingly, i am looking forward to living in Colorado again, if i can ever get to the right region–Boulder/Denver area. I’ll take cold weather, fresh air, creative arts communities, and cultural and entertainment choices any day over a bad beach. I just hope there’s no unforeseen form of hell there. Like giant, attacking snow bunnies.

"The 2nd Amendment needs updating to reflect our modern world. We don't use flintlock pistols anymore, we have high-tech weaponry meant for killing human beings. Civilians have no reasonable need for weapons of war."