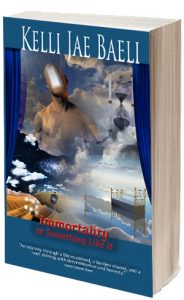 Another collection of essays from a fresh new voice in nonfiction, Baeli is nothing if not honest. From admitting profound insecurity as an over-forty single lesbian in the dating pool (Id, Ego, Super-Ego & the Social Security Number), to a revealing trip journal during a recent relocation, wherein she falls prey to a panic attack (Going to Denver Because You’re Dead), and the pensive examination of the self in Things I Don’t Need, Too Much World, and Held by Jell-O, the author of Immortality or Something Like It strides unabashed through the battlefield of life familiar to us all, sometimes wearing a jester’s jingling hat. The result is a portrait of a person you can relate to, who says all the things out loud, we can only murmur under our breath, and she does it in a way that makes you want to be counted as one of her friends in the journey.
~KIWI Club Reviews

“A hodgepodge journey through a life examined, a burden shared, and a soul shining with determination and honesty. You will come away from this book feeling like there’s someone out there who really understands what it’s like to suck the marrow out of life.” ~KIWI Club Reviews

Kettle chips should be called teeth chips because that's what they do. I eat them anyway.

autodidact aw-toh-DIE-dakt A person who has learned a subject without the benefit of a teacher or formal education, a self-taught person.