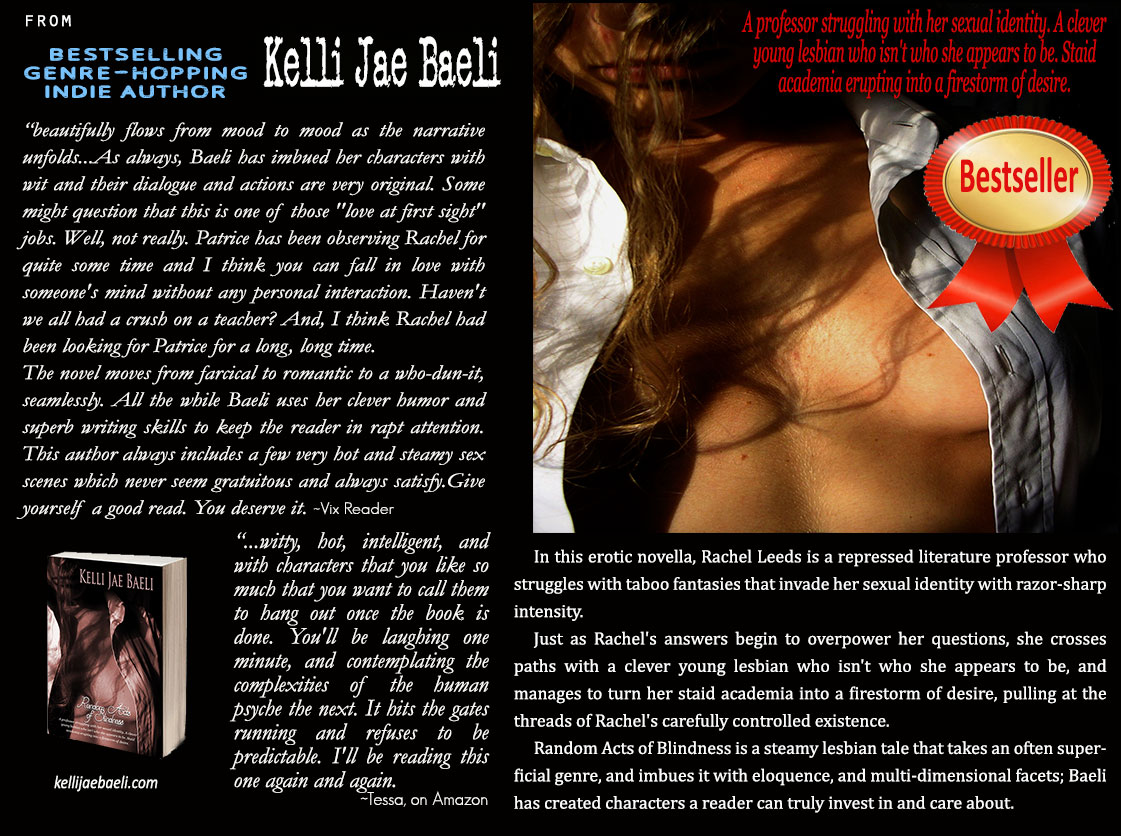 Great writing February 6, 2017
This author knows how to tell a story.
I read a lot and came across this author from another book called running the risk, I liked that book so much I read it 2 times. I looked her up and I think I am addicted to her writing.
A must read author

Never, in all her days, had she imagined herself in a position like this. Vivid fantasies aside, Rachel had never considered acting on the impulses that invaded her thoughts throughout the day, until her session with Dr. Bass. They were private affairs stored only in some scurrilous alcove of her mind. Yet her mind interacted with other minds, and often, there were fragments of information to be had in decidedly ironic ways. Dr. Bass, for instance, listened to her confession of the scandalous gearshift penetration mirage, and fantasy bondage scenarios and produced a copy of the bondage magazine. While not something Professor Rachel Leeds believed would qualify as a “literary device,” it was nonetheless pivotal in the events in which she was now participating. Namely, being on her way to a hardware store to find something to use as a whip on the girl who was naked and bound in a hotel room number 66, the Mark-of-the-Almost-Beast.

When she turned around, Patrice was in her chair, casually wiping her face with the neck of her own T-shirt. Their eyes met. Rachel considered the woman. The luscious blond hair, the ever so slightly oversized lips—a fuckable mouth, she mused, then banished the thought, along with its destination. “Where is this going, Patrice?”

“Does it have to go anywhere?”

“I’m. . .this isn’t the lifestyle I’ve had. . .I don’t know how to process this situation in any way that makes sense.”

Patrice rose and went to the coffeemaker, pouring two cups. “Why do things always have to make sense to you?” She added cream to them and handed one to the Professor.

Rachel looked down at it. “How did you know how I like it?”

Patrice leered at the choice of words for only a moment, before responding, “Observation. The sugar is below on the cart, the creamer is above. Thus, you use only cream. The sugar is for visitors. You would always provide things for visitors, even if you didn’t use it yourself. You’re accommodating.”

The professor reclaimed her chair, and pulled herself up to the desk, both hands around the cup. “So you think you know me, now?”

Patrice sat in the chair opposite the desk. “I think I know enough for now.”

She recognized a distinct craving for a cigarette, a glass of wine, a moment to luxuriate. . . yet that would be not only impossible here, but unprofessional. “What is it you want from me, Patrice?”

“I want to make you crazy with desire.”

“Is there something else you’d like me to have?”

Chess. She’s playing chess again. Just a fresh game; perhaps after placing me in checkmate on the previous round. “I’m out of my element with this, Patrice. And there’s this large specter of impropriety that I can’t ignore. You are a student, even if you’re only auditing and not registered. This is wrong.”

Patrice couldn’t help but smile. The professor actually thought there were some damn sex police around every corner. “You think you’re taking advantage of me?”

Faith. To believe in things not yet seen, they say. Patrice was faithful a long time ago. Then she communed with the faithless, and their cloying demands. She needed evidence because it made her feel foolish. And faith was lost. But the bitterness left her cold, barefoot, detached from the warmth of love and connection. Then she discovered a different faith. One born of her own power, left untapped for eons, swirling, ebullient, joyful. And now, coming full circle, she found herself wholly unqualified, still, to manifest from faith alone. Yet, perfectly accustomed to crying alone, wishing alone. Hope did not float. It sat on the bottom of a vast sea of isolation, weighted by its own lie.

I think that authors often underestimate their readers–authors and perhaps publishers, agents, editors and marketeers. If a writer gains fame with a breakthrough novel, he then seizes on that formula and begins to write the same story over and over again; the same people, dressed up in different clothes. There are only a handful of authors I feel write with a certain formula, but still manage to write something new each time. Those are the authors I continue to read. And I will read everything they write, with little concern for what genre it falls into; in this way, I believe that many formula writers do their readers a disservice. I remain interested in that author because of his/her command of the language, the ability to create characters I care about; the cleverness to keep me guessing, and the presence of mind to tie up the loose ends and give me a satisfactory ending that will not leave me feeling as though I had wasted my precious time. I want to come away from a book feeling good about something. That doesn’t mean I need fairy tales, either (although, really, fairy tales are notoriously dramatic, gory and often filled with characters and deeds no child should be privy to–Hansel and Gretel anyone?)

I find it exciting to hear of a favorite author breaking out of one genre and leaping into another. I can’t wait to read that book. It’s like seeing your love in new clothes; like driving a new car; like a meal you only get to have once a year, but that you love above all other meals. Thus, I hope to see more authors expand their genre-horizons. There are enough clones out there–both stories and writers. Give me a new species and my interest will be as intense as it originally was with the one that preceded it.

When President Obama leaves office (and Hillary takes the helm, of course) He should write a new book called "The Audacity of Ignorance" wherein he tells about his experience dealing with Republicans.

Writing is a fairly lonely business unless you invite people in to watch you do it, which is often distracting and then you have to ask them to leave. ~ Marc Lawrence

If its a good idea, go ahead and do it, it's much easier to apologize than it is to get permission ~ Grace Murray Hopper