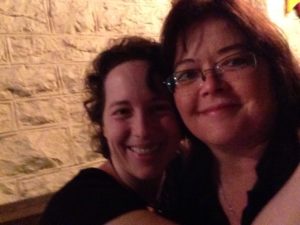 While I’m battling The Change of Life, we are also dealing with AÂ Change of Life. Major changes on the horizon, all of which we have chosen for ourselves, which of course, makes it easier to weather.
Our decision to make homesteading our goal, had to begin with all the preliminaries. Where? When? How?Â We know we want to settle in central Wisconsin, mostly because Melissa is from that area, and around Chicago, and her family is all there. She needs to be close to her grandmother, who is well into her 90’s and has had some health scares.
But Melissa has always loved the Northwoods, and so, I agreed this was the destination. As a writer, I can work anywhere, as long as I have a home base and the things I need to function. And i prefer colder weather, and my allergies absolutely hate it here. We are also anxious to put some distance between us and all the red-state-confederate-flag-waving-bubbas that are plentiful in this state. I am well and truly done with the south this time. Especially after this last election.In anticipation of our new journey, we have created a YouTube channel to document our progress. We hope to make our first video on Operation Homostead today or tomorrow.We’ll get a unique URL after we have 100 subscribers. So pop over and subscribe! And don’t forget to check out my catalog of books while I am on a hiatus from writing. I’m hoping once we get in the trailer and on the road, I’ll have the time and the mindset again to get back to it. Burnout is a real thing. 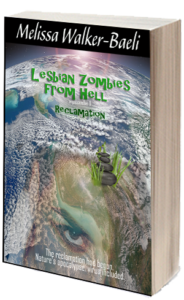 And then there’s Melissa, with her budding writer-self–she has already put out her first episode in Lesbian Zombies from Hell. She wants to finish up episode two and get that out as soon as possible. I’m very proud of her, and i think she has fantastic potential as an Indie Author.
But we’ll have to get some things done so that we can both sit down and focus on writing again. 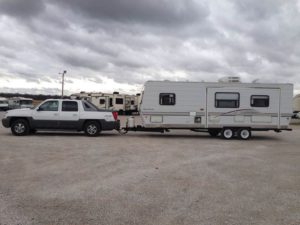 So, toward the goal of a homestead, it occurred to me that just moving to a rental place up there and dealing with switching everything, paying deposits and hook-ups for utilities and such, it would just be another money-sucking situation, that we would rather spend toward getting our land. I finally realized that the most obvious solution was to get a travel trailer and just go upt here and park it at a KOA park, and then we would be free to search for a homestead without making expensive trips and doing everything from a distance. We both agreed we could live that way if it was toward our ultimate goals and would get us there faster.

The search was on for an affordable travel trailer, using the money I had saved toward buying land. It’s a calculated risk, but i feel like it was a wise one. Within about a week, we found a salvage trailer at Colaw RV in Carthage, MO. We bought it, pulled it home. But then we discovered we couldn’t park it in the driveway as we planned (the best laid plans of mice and WOmen). As of yesterday, it is parked at a storage facility nearby. Thanks, Deaton Storage! We named her Dooflingywhatsit, and we will be painting it on the side. LOL). Â We’ll have to go back over there today or tomorrow to fix a few of the stabilizers, and do a few things initially; make a trip to Walmart for some tools and supplies.

In other news, after the trip home, and then to storage, we have become convinced that we need to 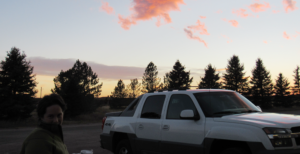 trade in the Avalanche for a 3/4 ton truck, just to be safe. I’m afraid we’d put too much strain on the Ava. So although we think of this truck as one of our pets (LOL. I know), we’re going to have to let her go soon. Sniff sniff. We have to let go of things to embrace others, right? We want to do things the right way, and so it’s a process.

I can’t believe i actually got the truck and trailer in our driveway TWICE, both forward and backward. But we couldn’t keep it there, and then i couldn’t get it out, because there was so little maneuverability there. Had to call on the expert services of our friend and neighbor Mary Pinkley to get it out and give us pointers. Thanks Mary!

Â
Then, when we took Dooflingywhatsit to storage, we had to find the safest route through these curvy, hilly streets, and then i had to get it in a ten foot wide parking spot. It took a long time, and more stress and frustration. Jeez. It doesn’t seem like rocket science, but it was surprising how much i didn’t know about backing up a trailer. There are nuances there you never even think about, until you try to do it. I think Melissa and I will be taking a class on parking a trailer and all the setup and such, so we won’t end up in divorce court. LOL.
In fact, this whole thing is a big learning curve. I have always prided myself on being competent in most things, but this has made me feel like the village idiot, and I’m afraid i have been very irritable and stressed about it. I’ve got to get my brain-framing going, and find a way to be more patient with myself and not contribute to the arguments that come up when we’re both standing there going,
“How the hell does that work?”
“Don’t ask me, I have no idea.”
or while trying to back up:
“GoÂ left.” 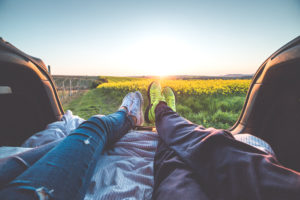 “Which thing? the back of the trailer? The back of the truck? My tires? or the steering wheel?” (After
all that, we watched a video to learn the proper hand signals and mindset for parking a trailer).
It will indeed be an adventure, but it could be stressful and negative unless we find our Zen about it. You’ve heard the old-dogs-new-tricks thing, right? Well this old dog is also really bad at being bad at something. I have an aversion to not-knowing. So, bring it, O’ Learning Curve Spirits. We have gloves on, and our jaws set, feet planted.
More to come.
Share
Tweet
Pin

Sometimes the facts in my head get bored and decide to take a walk in my mouth. Frequently this is a bad thing. ~ S. Westerfeld