↓
Home→EMOTIONS→angst→We the People, Saying NO 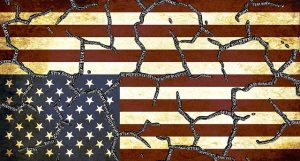 Negativity. It’s not just a mindset anymore, now it’s a natural result of watching national election events. I’m talking about the negativity that arises naturally from watching the masses trail along the demi-gods like lemmings, believing the most obvious and outrageous lies, with no compunction about checking the facts on their own.

The hatred, the vitriol, the dirty-dealing, right under everyone’s noses while no one ever gets held accountable.

Maybe it’s more accurately disillusionment, but that word doesn’t seem strong enough. But it disgusts me. I see so much potential for us to have a peaceful, loving, integrity-filled world, but the process is so corrupt, that even the politicians who want to make meaningful changes, like Obama and Hillary, are constantly fighting this corruption just to get the simplest things done.

"Vegans must not partake in oral sex, because they don't eat anything with a face."

"This administration is backed by a transnational mafia, rapture fiends, vicious plutocrats, eugenicists, white supremacists. They are all using Trump as a vehicle for their own horrific agendas." -- @gaslitnation
https://www.patreon.com/posts/united-states-of-35239754

Good lord this video. Like a thoroughbred making a late break in a horse race