Something happened to me. I was applying formatting to print file for one of my books,

feeling the dessicated adrenal supplement coursing through my veins, and i was singing along to Shawn Colvin on “Get out of this house”, formatting, and feeling pretty damn good…and then i just started crying…not from sadness. It was a sensation I hadn’t felt in such a long time…one I can only describe as the elusive feeling of pure JOY. It made me want to perform again, write songs again. Buy a guitar to use until i could get mine from storage…I could barely sing the words because i was choked up. Poppet was staring at me like I had a bowl of fruit on my head. But i just kept singing and crying.

It’s been so long since I’ve sung. It used to be such a big part of me. But after being elbowed out of my own band all those years ago, (by my ex-girlfriend, who was the guitarist), i had this aversion to music. I felt I’d lost everything that mattered. It was devastating. I couldn’t listen to music anymore, because everything reminded me of it.

Then, after my recent 3 years also not singing in New Zealand (because my guitar and all my recording stuff was left behind in storage), it was another thing in that situation that reminded me that i was losing so many parts of myself. I was becoming a ghost. The new girlfriend who i thought was THE ONE, turned out to be a big fat lie.

Now, that i am back in the States, I’ve begun the process of rebuilding from scratch. Got a beautiful house (with no furniture), but I’m probably happier than I’ve ever been. Knowing i can regain all those things i loved, all those parts of myself that were left behind. Or suffocated by that terrible situation. Knowing that I can do all those things again, reclaim my identity and be safe and secure at the same time.

An odd correlation to all this is that in the last 3 years, I had developed a snoring problem (but only when sleeping…heheh)–but i have always been one of those people who never snored. And i couldn’t stand to hear anyone else snore (makes having partners a dicey proposition, because that can certainly screw things up for sleeping in the same bed). But since i started snoring, it has been so irritating, that whenever i start doing it, i immediately wake up. Not good for someone who already has had a lot of trouble with insomnia. But when i thought about it, i realized that it felt like my throat

anatomy had gotten flabby…like an unused muscle…and that’s when i had the idea.  I haven’t been singing regularly, for a long time. And maybe, that part of our anatomy needs toning like everything else and that’s why it happened. Then the other day i actually Googled it and found that indeed, my theory was right. Singing is often suggested by experts to strengthen the tone of those throat and palate bits, to prevent/recover from snoring. I have started singing everyday, now, because i wanted to test the theory. Last night i didn’t wake up snoring. Not sure if that’s the placebo effect or what. But….i guess we’ll see.

Anyway, this joy-thing that seemed to stem from singing… I could explain it by the fact that i finally got my dessicated adrenal supplement, which i desperately needed. Today i have felt like that nonworking half of my brain switched on. I was multitasking, having ideas, feeling energetic…and so maybe that joy was just relief about how my life is now, combined with singing again, and realizing on an emotional level how much i missed it.

I don’t know yet what caused those feelings, but i like it. My birthday is on Friday, and for the first time I don’t dread it, because it’s not the marker of just another year of not having the life i want. Aside from a partner to share it with, everything is falling into 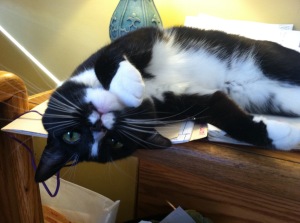 place. I am so fortunate. My career is riding high, I’ve got a lovely home, plenty of money, local friends, online friends, a kitty cat (and about to get a kitten–because you know, Poppet needs one). I feel at home. I feel safe. I feel happy and productive. I don’t even know how to process such a clump of sweetness an light. But i love it.

ADDENDUM: After i watched that video of Shawn Colvin (posted below)–i was reminded of how terribly hard it is to play harmonica and also sing–i could never do it in my band days while also playing guitar! it requires great concentration and coordination and massive amounts of breath control. So i was impressed that could even get through this song! I remember begging to have only certain songs follow songs where i sang and played harmonica because i just couldn’t catch my breath afterward. I posted a couple of vids of me playing harp in the good old chick-band days.

Unless of course, he kills all the #BlueVoters and the #Protesters die from #COVID, and #MailInBallots are suppressed, and he has help from #Putin again, etc. I'm not at all confident we have this in the bag.

Donald Trump is a racist traitor to his country.

There will be no statues of Trump.

There will be no presidential library for Trump.

There will be no street named after Trump.

In the near future, there will not even be any buildings with the name Trump on them.

In case you think #rubberbullets just sting a little.
THESE ARE LETHAL, and not at all necessary. Cops are aiming at people's faces. This is part of #PoliceBrutalityPandemic

This is what one of Trump’s rubber bullets to the forehead looks like.