It started out with me on my way to the grocery store, having awakened with no coffee in the house-a tragedy all on its own. I thought of that little coffeeshop down the street and thought maybe I’d stop in to check it out, so I brought what i lovingly refer to as my Tippi Tap Typer just in case. 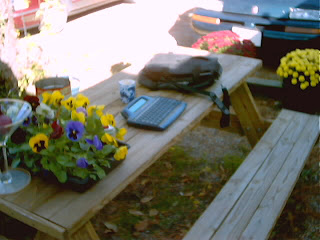 Roscoe’s Music and Espresso Cafe was a tiny establishment, but intriguing. It was time I tried to get out of the house a little and use my new toy in a different environment. I ordered a White Chocolate cappuccino and chatted with the owner for a few minutes, and then a young woman walked in. The first thing I noticed was that she immediately invaded my space. We exchanged pleasantries. The tiny coffeeshop was no bigger than most people’s kitchens, and I tried to move aside, but she hemmed me right in, ordering his house blend.

The proprietor, Roscoe, informed her that he was just now making a new pot. She asked how long it would take, and he said just long enough for the water to run through.

“Could you give me some sort of idea, then?”

Jolly good? That’s when it dawned on me that she had a British accent.

Roscoe started the brew and the Space Invader waited, turning a bit to examine a painting on the wall. She then would not let me get past her to sit down out of the way, so I just turned back around and stayed where I was. I don’t think it was intentional. I noticed the Bible she was holding behind her, clutching it almost fiercely, standing erect, as if a recruit at attention. My first reaction was Oh great, a religious zealot. I was afraid she’d try to witness to me. Faith is a wonderful thing, but those who wander around with little else other than a Bible, are bound to launch into some religious tirade or hackneyed effort to save my soul. I had already noticed that my communication skills were suffering from caffeine withdrawals, so I didn’t feel up to the challenge.

Then she did the inevitable witnessing. Thankfully, to Roscoe. “Have you ever read the Bible?

I understood him to say yes, but heard him counter with another book he had read, asking her if she had read it. She said no, there was much too much in her head right now. But she had realized that the Bible had everything in it she needed, about life and love and so on, and that we should read it, because it answers so many questions. I asked her if she had read The Seat of the soul for the same reasons. She said no, as he poured her cup and handed it to her. She carried her House Blend out to the patio and sat, lighting a Camel filter right next to the sign that read Thank you For Not Smoking.

Roscoe gave me a knowing look, and whispered, “She comes in here a lot…she’s been in and out of institutions. She’s staying at the halfway house up here. Doing pretty well now, except that today, she seems to be British.” I was surprised and intrigued. It was clear what the implication was, now. He motioned me to follow and pointed out the front window. “See that tower, right over there between that building and the water tower is a halfway house for people who are–“

Three people come in, and I comment, “oh look out, you’re getting a rush.”

He laughs. The people order, one of them a lady who says she misses her coffee, as she is from “Coffee country.” I engage her–ask if it’s Seattle–she says another town in Washington, above Seattle and I tell her I’m thinking of moving to that area in May. She says what she doesn’t miss is the dismal weather and I confess I love weather like that.

I put a five dollar bill on the counter, so that I won’t forget to pay.

The Space Invader Zealot returns asking for a refill, saying, “I should think that this much coffee cannot possibly be good for the stomach.” She takes her refill back out.

I carried my coffee and Typer out to the deck for a little fresh air and maybe morbid curiosity, so that I could be within earshot and eyeshot of her. She comments on what a lovely day it is, and I agree. Shortly, I hear her chuckle. I look up and she is smoking, smiling, and whispering a few words to some unseen table companion. I know then, she really is certifiable. She sucks on her camel filters, and makes properly British faces, laughing, obviously enjoying the repartee of the voices in her head.

I am intrigued enough to want to talk to her, but intimidated enough not to. How does one talk to a crazy person without sufficient psychological experience? What if I say something that screws up this reality she has created for herself? What if that little swim in the cerebral fluid garners me a proper British drowning? I move to the smoking section, situated at a picnic table behind her, lighting a cigarette of my own, and bend back to my writing.

A moment later, I notice Birkenstock knockoffs a few feet from my table and look up.

“Isn’t it though?” She returns to her table and lights up.

A young man approaches, asking about my typing gadget and I give him the sales pitch and he seems interested, then wanders back into the cafe. I wondered why he came outside just to ask me about my Typer. After he leaves, Space Invader turns around and says, “These are delicious cigarettes.”

Delicious? “I’m glad you like them. Most people don’t because they’re menthol and lighter.”

“Oh no, there’s just enough menthol, and it doesn’t last long, and there’s this fruity aftertaste–“

“Yes,” I say, while thinking, funny she would say Fruity.

Later, I go inside the cafe for a refill and while I wait, admire a portrait of a man who is playing harmonica. I comment on how good the painting is. Roscoe tells me it’s by a local artist, and he knows the guy in the painting, played music with him for years. I see an old photo of Roscoe on the wall, jeans, no gray beard, but still a mustache, wearing one of those poofy down slicker vests, and a newsboy cap. “This is you, right?” I ask.

“I can see it’s you. You have the Jack Kerouac look to you in this–you have this face that seems familiar–were you famous at one point?” I smile. “–maybe in a movie you might not claim?”

“Yeah, I got to play banjo a little.”

Space Invader comes in and announces she is finished with coffee, and wanders back toward the halfway house. I finish my third cup, and settle the rest of my tab and tip him two dollars. He dubs me Customer of the Day.

Outside, I hear the now familiar laughter of the Space Invader. She is nearby, toward the road, probably standing there waiting to cross, and having a pleasant conversation with no one.

No use crying over spilled tears.

â€œHow dismal it is to see present day Americans yearning for the very orthodoxy that their country was founded to escape.â€ ~ Christopher Hitchens

Please notice, all you haters. This black man saved a WHITE CHILD. You could learn a lot from that. But you probably won't. What if that was your kid? Would you still hate this black man?

A salute to this former Marine.

Phillip Blanks dove to catch this child who was dropped from a burning apartment.

This is a hero in every sense of the word.