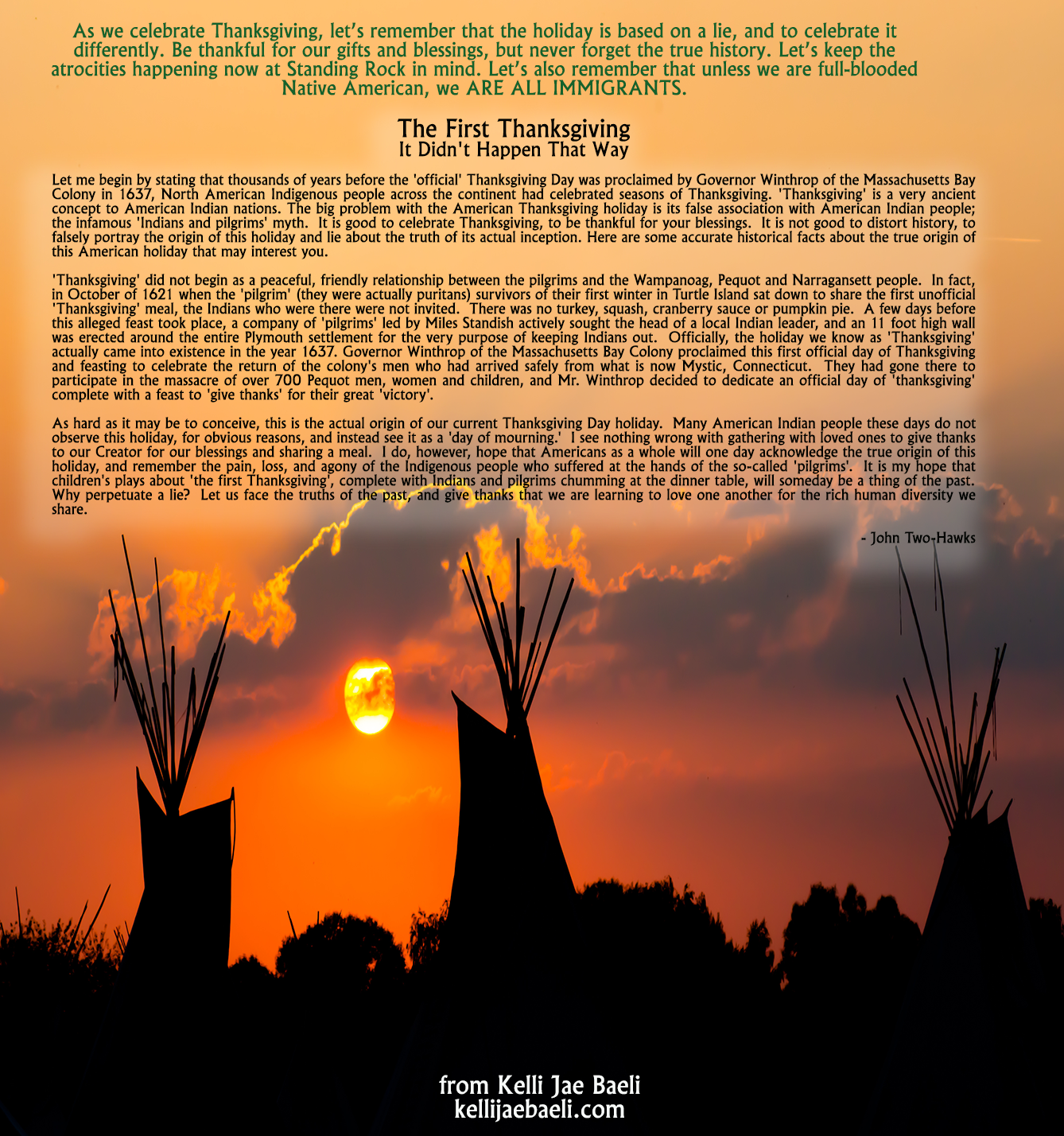 As we celebrate Thanksgiving, letâ€™s remember that the holiday is based on a lie, and to celebrate it differently. Be thankful for our gifts and blessings, but never forget the true history. Letâ€™s keep the atrocities happening now at Standing Rock in mind. Letâ€™s also remember that unless we are full-blooded Native American, we ARE ALL IMMIGRANTS.

The First Thanksgiving It Didn’t Happen That Way Let me begin by stating that thousands of years before the ‘official’ Thanksgiving Day was proclaimed by Governor Winthrop of the Massachusetts Bay Colony in 1637, North American Indigenous people across the continent had celebrated seasons of Thanksgiving. ‘Thanksgiving’ is a very ancient concept to American Indian nations. The big problem with the American Thanksgiving holiday is its false association with American Indian people; the infamous ‘Indians and pilgrims’ myth. It is good to celebrate Thanksgiving, to be thankful for your blessings. It is not good to distort history, to falsely portray the origin of this holiday and lie about the truth of its actual inception. Here are some accurate historical facts about the true origin of this American holiday that may interest you. ‘Thanksgiving’ did not begin as a peaceful, friendly relationship between the pilgrims and the Wampanoag, Pequot and Narragansett people. In fact, in October of 1621 when the ‘pilgrim’ (they were actually puritans) survivors of their first winter in Turtle Island sat down to share the first unofficial ‘Thanksgiving’ meal, the Indians who were there were not invited. There was no turkey, squash, cranberry sauce or pumpkin pie. A few days before this alleged feast took place, a company of ‘pilgrims’ led by Miles Standish actively sought the head of a local Indian leader, and an 11 foot high wall was erected around the entire Plymouth settlement for the very purpose of keeping Indians out. Officially, the holiday we know as ‘Thanksgiving’ actually came into existence in the year 1637. Governor Winthrop of the Massachusetts Bay Colony proclaimed this first official day of Thanksgiving and feasting to celebrate the return of the colony’s men who had arrived safely from what is now Mystic, Connecticut. They had gone there to participate in the massacre of over 700 Pequot men, women and children, and Mr. Winthrop decided to dedicate an official day of ‘thanksgiving’ complete with a feast to ‘give thanks’ for their great ‘victory’. As hard as it may be to conceive, this is the actual origin of our current Thanksgiving Day holiday. Many American Indian people these days do not observe this holiday, for obvious reasons, and instead see it as a ‘day of mourning.’ I see nothing wrong with gathering with loved ones to give thanks to our Creator for our blessings and sharing a meal. I do, however, hope that Americans as a whole will one day acknowledge the true origin of this holiday, and remember the pain, loss, and agony of the Indigenous people who suffered at the hands of the so-called ‘pilgrims’. It is my hope that children’s plays about ‘the first Thanksgiving’, complete with Indians and pilgrims chumming at the dinner table, will someday be a thing of the past. Why perpetuate a lie? Let us face the truths of the past, and give thanks that we are learning to love one another for the rich human diversity we share. ~John Two-Hawks

After many months of not being able to write, I seem to have a spark again. It's a #dystopian #apocalyptic story of undetermined length. What do YOU think is causing this? Moving my home office to the sun room with windows? or renewing my RX for #Xanax ? #writinglife #Excerpt