(from my book in progress, Supernatural Hypocrisy: The Cognitive Dissonance of a God Cosmology”)

A popular booklet for children in the late 19th Century was authored by Father Furniss, an English priest who wrote “books for children.” Furniss delighted in describing the horrors of hell: 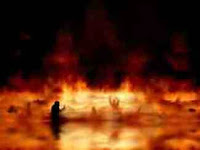 “…his eyes were like two burning coals. Two long flames came our of his ears…sometimes he opens his mouth, and breath of blazing fire rolls out. But listen! There is a sound just like that of a kettle boiling. Is it really a kettle boiling? No. Then what is it? Hear what it is. The blood is boiling in the scalding veins of that boy. The brain is boiling and bubbling in his head. The marrow is boiling in his bones. Ask him why he is thus tormented. his answer is that when he was alive, his blood boiled to do very wicked things.”

“A little child is in this red-hot oven. Hear how it screams to come out! See how it turns and twists itself about in the fire! It beats its head against the roof of the oven. It stamps its little feet on the floor. You can see on the face of this little child what you see on the faces of all in hell–despair, desperate and horrible.”

I wish love really was like a romantic comedy.

“Whether a character in your novel is full of choler, bile, phlegm, blood or plain old buffalo chips, the fire of life is in there, too, as long as that character lives.”

That religion may have served some necessary function for us in the past does not preclude the possibility that it is now the greatest impediment to our building a global civilization. ~SAM HARRIS, Letter to a Christian Nation

Nowadays, to say things like "trump is terrible, trump is corrupt" now strikes me as saying "i think Hitler might be a bad guy." #Duh He is EVERY BIT AS BAD AS Hitler

This is the best thing you'll see today 💕💕

Just received from Beijing. She says people in #Wuhan r locking down the infected people within their homes so that they can't escape out in the open, to stop the spread of #coronarvirues The infected families r being left to starve & die. Horrific 😢
03

I used to go to SC every spring. It was 'car title loan' shops next to 'pay day loan' stores. Everything was designed to keep the poor, poor. Now the Gov tells his 200 tenants to ignore unemployment & find the cash.
Maybe a negotiation? A compromise? WWJD?
https://www.rawstory.com/2020/04/south-carolinas-gop-governor-is-charging-his-200-tenants-rent-during-coronavirus-crisis-report/#.Xof1G7zZAzA.twitter