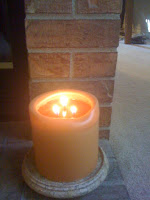 I recently discovered that cats are not flammable. Now, before you call PETA and leave nasty comments, let me point out that this knowledge was gathered through an unfortunate incident involving a fluffy tail and an otherwise innocent candle.

My cat, Biscuit made the mistake of swishing her tail over the triple wick flames of a Hazelnut cream candle, and POOF! her tail was ablaze, and as i reached for her, as she jumped atop a shelf by my computer, i realized the flame had already gone out. I had to chase her though the house, trying to find out if she was okay and if a trip to the vet was in our immediate future. It took me a long time to find her. Not an encouraging bit of knowledge, as i imagined what it would have been like if her tail DIDN’T extinguish itself, and I had to chase 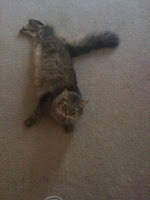 her–fully ablaze (the cat, not me), helpless to save her from a horrible fate. But, as it turns out, there was no cause for concern. when i finally coaxed her out from under a dresser, she was none the worse for wear except for the singed parts, which seemed entirely superficial.

I’m not sure if there’s a sort of breed restriction on this fact. Like, are Angora cats flammable, while Calicos are not? Are Tabbies flammable, while Siamese are not? I would guess that Sphinx cats are nonflammable, by virtue of the fact that they don’t have hair at all. What they would get is a burn. And there are creams for that. So as to the question of flammability where it concerns felines, I may never know. And that’s a good thing, I suppose, since this isn’t the type of field research I like doing. Some questions just don’t need answers.

"I don't have a spatula big enough to turn that shit-patty over."

Writing is not necessarily something to be ashamed of, but do it in private and wash your hands afterwards. ~ Robert A. Heinlein