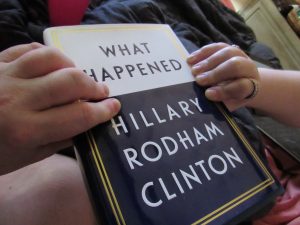 This blog is from both of Us. My words in black, Melissa’s in red.

So, here’s a funny thing…I guess you could say it’s WHAT HAPPENED.
We preordered–
SHE preordered. Though I won’t complain.
…Hillary’s book, expected it on the 14th, but this morningÂ it still wasn’t in the mailbox…
(our morning starts about 3pm these days). I’m about to send Amazon a snarky note–
Then it hits me, IÂ say, “Oh!” and me and my birthday-suit jump out of bed and jiggle down the hall to 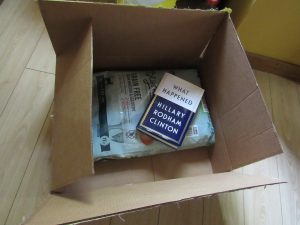 the foyer…
I do so enjoy the fact that she sleeps auÂ naturel.
…where there is a big box delivered the other day. I didn’t open it because I knew it was the cat food and we don’t need it yet.
Yeah. Hillary’s book was in THAT box with the cat food which was delivered ON THE 12th…
Yep. Right on top.
All this time we’ve been anticipating this book and not only did it already come two days early, but it’s been sitting in our foyer with our Beyond Grainfree Ocean Whitefish & Egg Recipe.
Yuck. But at least I don’t have to eat it.
So now, we’ll probably have to read it to each other,
I love the sound of her voice.
because we didn’t anticipate that we only have ONE copy.
(I did).
But that’s WHAT HAPPENED.
Yes, it is.

And during all that, duty was still calling.Â We had to finish up the line edit for The Girls in the Band. This is my latest book and the first one I’ve written in first-person, present-tense,Â and which I intended to be a novella, but it turns out, it’s now a novel.
I read through it so fast, the first time, I’m embarrassed to say I missed pretty much everything. But it was so good even then. Now it’s even awesomer!
This is WHAT HAPPENED: While Melissa was reading the first draft, I was looking at it too, and I had this niggling feeling that something–a lot of things, actually–was still missing…IÂ just kept thinking, This couldÂ have a lot more meat to it. That intuitive writer-thing….I wasn’t giving it myÂ best.
She always gives it her best.
I’ve been trying to get back on track and on schedule with my novelwriting, after having an 8-month sabbatical and then having surgery. My impatience to get publishing again was usurping my concern with CRAFT. Nothing should be more important to me than putting out my best work, though. Even if we are saving for that travel trailer to take our 48 stateÂ adventure soon.

Besides, this is the third book I’ve written in the last seven weeks, so I figured IÂ had a bit of time. (I released Go.Leave.Stay (co-written with Melissa) and Circling Uranus already. 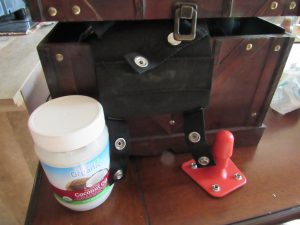 Post-Coital Exhibitionism at its finest

I’m so glad she filled it out. A really good book is now even better. AND–I got to spend two whole days sitting with my wife during edits, interruptedÂ only by somewhat frequent breaks of the fleshy variety. Thank you, HRT.

Anyway, I set about expanding The Girls in the Band, finished that second draft, did the line edits. Now it’s live on Amazon and already charging up the charts. Fingers crossed. I’m glad I took the time to expand it. I think it’s a much better book now.

Yes, it is!
Now, after I get caught up on the other business and the marketing, I can finally sit down and read Hillary’s book. (I thought I would be able to read it on breaks. but there weren’t any……)
No, because then we’ll just be distracted...
DAMMIT.
Anyway, I hope my readers enjoy this newest addition to my body of work.
Share
Tweet
Pin

"My pillow is so squishy that when I lie down on it...wait-now that makes me sound like a kitten...when I put my head on it--yeah--the sides pop up and over my ears. I look like the Flying nun with an inflamed habit."

Religion has convinced people that thereâ€™s an invisible man,living in the sky, who watches everything you do every minute of every day. And the invisible man has a list of ten specific things he doesnâ€™t want you to do. And if you do any of these things, he will send you to a special place, of burning and fire and smoke and torture and anguish for you to live forever, and suffer and burn and scream until the end of time. But he loves you. He loves you and he needs money.
~ George Carlin

Remember when u scream about UR preferred VP choice: it's winning the #Senate is just as crucial as presidency, so losing a senate seat would be stupid. THIS IS NOT AN EPISODE OF "Dancing With the Stars." It's the fate of our fucking country. Act like it. #BoardtheBlueChooChoo

Either @TimKaine and I had a very vivid shared hallucination four years ago or Maureen had too much pot brownie before writing her column again. https://twitter.com/nytopinion/status/1292105898802937856

It’s hard to fathom, but it has been 36 years since a man chose to put a woman on the Democratic ticket with him, writes @MaureenDowd. To use Geraldine Ferraro’s favorite expression, “Gimme a break!” https://nyti.ms/30EmLjx

My wife got stung by a bee on her forehead, she’s in the ER now, her face is all swollen up and bruised, she’s lucky to have survived. Luckily, I was right there when it happened and close enough to hit the bee with my shovel.

KANYE West and Khloe Kardashian's companies were among those that received millions of dollars in the coronavirus bailout program.

Donald Trump's administration handed out up to $5million to support West's company Yeezy the Treasury revealed on Monday. Khloe got $2 million! Why?

Now that Trump the GOP and Russia are Hacking 2020 in plain sight because they have no fear, can we all agree that is more than obvious that they hacked and stole 2016 from Hillary?

77,000 Votes from 3 States with a history of Voting Dem in Presidential Elections.