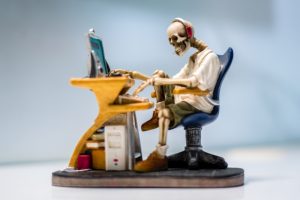 Since my surgery at the end of May, I have had to accommodate my recovery, while still getting my work done. The whole thing has made me feel old and decrepit.

Our bedroom is now in the living room because it was just easier to put everything in one room. Especially after we realized the landlords weren’t going to cut down the dead trees and falling limbs just outside our wall of windows in the bedroom. We didn’t feel safe there, so the living room became our new bedroom.

Only recently, could I sit in a desk chair as I normally do, but not for very long (I have again been on a quest for a comfortable chairÂ – Â I might have found one, but only time will tell.)

Problem is, I’ve been dealing with renewed back issues and the inability to sit up for very long. So while I’ve healed enough from surgery to sit up, my back has other ideas. I don’t want to spend 22 hours a day in bed, but I can’t seem to spend much time upright without lots of pain and discomfort. I have to be able to lie down when things get too miserable.

I’ve got a lot on the docket right now. While Melissa and I have been thrilled that Go.Leave.Stay became a bestseller, we are both hard at work on the next projects. She’s working on the novella

version of her Lesbian Zombies from Hell, and I’m working on #4 in the Rain Falls series, as well as finishing a novella titled The Girls in the Band, and also working on a story called Circling Uranus (yes, it’s a sci-fi spoofy thing that will include, for your entertainment and mine, tentacle sex.)

So, I have my desktop CPU in the living roomÂ near the bed, but it’s hard to move it so the keyboard and mouse will reach both in the chair and in the bed. It’s been an ongoing challenge that my wife and I have been trying to solve, to include the use of an old netbook that just became too much of a hassle. Plus, I hated transferring my files back and forth between two computers…. Â I mean, how can an author write convincingly about tentacle sex, when she’s so uncomfortable?

Eventually, I suggested putting the TV and stand (yes I’m using the TV as a monitor) at the foot of the bed, and my desk on the other side of the TVÂ –that way, I can spin the TV around according to where I’m working–at the desk, or in bed. But everything had to be unhooked and moved each time becauseÂ things had to reach. (and yes, IÂ considered investing in a wireless keyboard, but they don’tÂ make a wireless trackball mouse that I insist on using, so a wireless keyboard would not solve the problem of wires and cables reaching where they need to go). And then there’s the keyboard light, which I need, because otherwise i can’t see what I’m typing and all my work comes out like:

Even though I’ve been writing professionally for many years, some portion of my brain still thinks I need to see the keys.

I finally had the idea to put my CPUÂ on a rolling chair, so that it can be moved the few feet it needs to for my position at the desk, or my position in the bed. Â Thanks to my wife, all that was done, and now it seems to be solving the problem.

If the sex scene doesn't make you want to do it - whatever it is they're doing - it hasn't been written right. ~ Sloan Wilson

If you think that Christianity is the most direct and undefiled expression of love and compassion the world has ever seen, you do not know much about the world's other religions. Take the religion of Jainism as one example. The Jains preach a doctrine of utter non-violence. While the Jains believe many improbable things about the universe, they do not believe the sorts of things that lit the fires of the Inquisition. You probably think the Inquisition was a perversion of the "true" spirit of Christianity. Perhaps it was. The problem, however, is that the teachings of the Bible are so muddled and self-contradictory that it was possible for Christians to happily burn heretics alive for five long centuries. It was even possible for the most venerated patriarchs of the Church, like St. Augustine and St. Thomas Aquinas, to conclude that heretics should be tortured (Augustine) or killed outright (Aquinas). Martin Luther and John Calvin advocated the wholesale murder of heretics, apostates, Jews, and witches. You are, of course, free to interpret the Bible differently--though isn't it amazing that you have succeeded in discerning the true teachings of Christianity, while the most influential thinkers in the history of your faith failed? ~SAM HARRIS, Letter to a Christian Nation