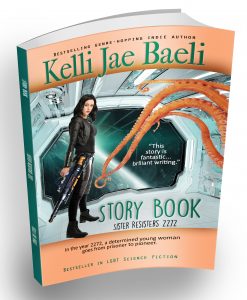 metimes the best decisions are the ones we make when we have no choice.

“I remembered the history lessons my grandmother gave me, passed down from her mother, and her mother’s mother. How it used to be perfectly acceptable for two of the same gender to mate. All it took was the apathy of the people, and one fascist regime—one started by a man named P. Murt D’lanod—taking over the governing bodies, and all those tolerances and acceptances were a whimpering dot on the chart of human history. We called his adherents P-Murts. And we were the Sister Resisters, bent on reclaiming freedom for all.

Story Book had no idea how to pilot a transport ship. The narratives on her reader never taught her such things. But here she was, waking up on one. The trajectory from Pangea to the prison planet, Sintori-5, would have spelled her doom, had the ship not met with some mysterious mishap. She’s alone, except for another surprising prisoner Story finds in the only other remaining suspension pod.

“The road to hell is paved with works-in-progress.” ~Philip Roth

patinaed puh-TEEN-uhd Having a coating, covering, or sheen. Used especially to describe the corrosive green layer that forms on copper and its alloys.

That's about as likely as you being struck by lightening while being sodomized by Martians.
~ Author Redacted