“I love this series! What a wonderful grouping of stories! Once I read the first, I prepared to be let down by the subsequent books, but in fact, the opposite was true…each book just kept getting better and better! More, more, more!” ~Carla, on Amazon 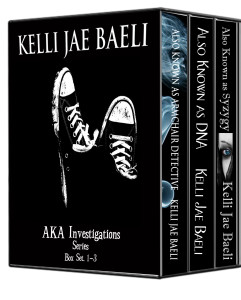 The popular AKA Investigations Series now in 2 box-sets. Share the adventures and romances of Jobeth, Phoebe, Izzy and Ginger. Never a dull moment, and plenty of chills, thrills and laughter, too.

The second box set continues the AKA Investigations storyline with books 4,5, and 6. It includes Also Known as Rising & Falling, Also Known as Sleepy Cat Peak, and Also Known as Blue, Dark & Bright.

Only $6.99 for each bundle. That’s half price over buying each book separately!

Roe reviewed AKA Investigations Series (6 Book Series) March 20, 2016:
“A FIVE STAR SERIES! Ms. Baeli’s AKA Investigation Series takes the reader on a roller coaster ride of various emotions which allows the reader to become thoroughly engaged throughout these books. This type of engagement allows the reader to take a personal interest in the story and characters. I find this type of reader involvement very rare with many of today’s writers…definitely not so with this author. I highly recommend this series for any reader who is tired of settling for mediocre writing. You will not be disappointed!”

By Programming Kat on February 28, 2016:
“A collection of good reads. These may be quick reads, but they may touch some deep spots within which you will have to investigate. These books are suspenseful, yet thoughtful and even light-hearted. found myself laughing out loud in some places and shaking my head in others. The characters feel like real people; some I’ve known while there were others I wish to have known. Enjoyable.”

By Jen on July 19, 2015:
“I really enjoy this author. A breath of fresh air. All the characters are well developed and the stories have nice twists and humor. Definitely an author I will follow.”

By Amazon Customer on September 6, 2015:
“Enjoyed the set. you won’t put it down until you finish the whole thing.”

By cjldypyro on March 10, 2015:
“Great Series! I loved it. The characters are believable and show both their strong and weak sides throughout. Their roller coaster of situations and romance coupled with intrigue and mystery hold your attention throughout Although at times, I winced at the violence against women written on the pages, I know there is more truth than fiction there. When we ignore it and pretend it isn’t reality, we do no justice to the victims who have suffered through it. Bravo, highly recommended.”

By cheryll jones on January 5, 2015:
“Loved this entire series. Hopefully there will be more in the future with these same characters. I think these characters would make an awesome tv series. Crime fighting, humor, love and friendship. I have watched other shows that offered way less. l was hooked after the first couple of chapters from Phoebe and Jobeth, Izzy and Ginger and even the new characters that were introduced.] would love to see more about Chloe and Miss Demeanor in the future. Great read. l couldn’t put it down.” 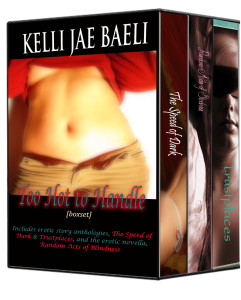 Only $5.99. You save 60% buying the bundle over buying each book separately. 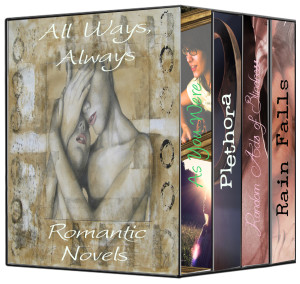 Only $7.99. You save 60% buying the bundle over buying each book separately.

4 Romantic Novels from Bestselling author, Kelli Jae Baeli in one bundle/box-set. Includes As You Were, Plethora, Random Acts of Blindness, Rain Falls (a best seller!). 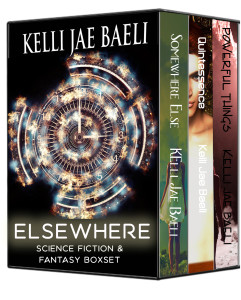 SOMEWHERE ELSE. A non-physical walk-in soul makes an agreement with another incarnated soul to take over her body. The Walk-in, perhaps too fearless, and too hungry for the pleasures of the flesh, discovers she has inherited the life of Daelah Murdock, a Mormon goody-two-shoes with a pathological attachment to the color pink. The surrogate soul’s life as a lesbian cop did not prepare her for this. Or did it? As a live-in caregiver for two men–one blind, the other wheelchair bound–Daelah’s life seems bland and puerile.

QUINTESSENCE. “If you push your luck, expect it to push back. That’s what my Grandma Beasley used to say. And she was right. I had it illustrated to me ten days ago, and again on this frigid October night in the middle of Nowhere, Kansas.”

He is about to discover, literally, a new reality, and that the research Professor Pritchard has done will lead him to the life he didn’t know he was missing. If he could only get used to all the differences; starting with the fact that his own gender has changed, and he’s now a lesbian.

POWERFUL THINGS. It’s hard enough building a life on a new planet, but when you’re faced with dissension in your own tribe, you have to decide and decide quickly just how far you’re prepared to go.

Sivon is half Bandonese, half human. Her mother was one of ten female survivors when their craft crashed on a farm in rural Colorado. Now she is running from one of her own people, risking everything for the things she believes in, and for the love she’s found with a local young woman.

Mozzik, the self-appointed leader of the Bandosapiens, has his own agenda, and Sivon has just crossed the line. He’s out to find her, to eliminate the risk she’s flirting with and to assert his control once more over the whole tribe. 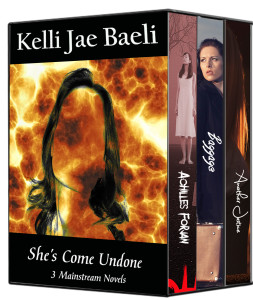 Achilles Forjan.  Amy, a sleep-deprived paramedic with memory lapses, becomes the prime suspect in a series of murders for which she has no alibi. Amy’s friend Karma, uses her degree in Criminal Psychology and a gift for psychometry to search for clues to Amy’s innocence, in spite of a persistent detective.

Baggage. During Hurricane Katrina, Patriarch Dominic Fontaine meets his freakish demise—the rubble of his “hurricane-proof” mansion all around him—and no one suspects that a vengeful woman came to kill him. In the aftermath of the worst hurricane in American history, the secrets held in a safe deposit box spur the Fontaine offspring into a journey of enlightenment and self-discovery as their lives converge with strangers, and the mysteries of karma, hope, and synchronicity take over.

Another Justice. Revenge is a dish best served. Two women, each seeking justice in her own way, after suffering through terrible crimes Margo must keep her covert deeds from her girlfriend and best friend, who are both police detectives. Omega Fisher’s name seems fated, somehow. After losing everything to the evil that men do, she is, indeed, fishing for a few men, and she does, indeed, intend to END them.

I always get up several times after going to bed because i think of things i forgot to do. After i reach the destination of my pre-slumber task, I forget what i remembered I forgot.

“Genius gives birth, talent delivers. What Rembrandt or Van Gogh saw in the night can never be seen again. Born writers of the future are amazed already at what they’re seeing now, what we’ll all see in time for the first time, and then see imitated many times by made writers.”