↓
Home→PSYCHOLOGY→coping skills→Furiously Happy:
My brain hungered for humor. Was absolutely famished for fun.
5
(2) 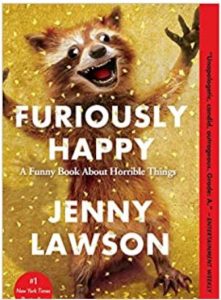 I am very picky about the books I read, and it’s hard to find anything that doesn’t either piss me off or bore me. That might just be a product of having been an Indie Author, honing her craft for 30 years, or maybe it’s just me being too damn critical.

But I never had problems in my younger years. Like say, my twenties and before.

But then, I didn’t write my first book until I was 26. So maybe it really is that being an author affects my ability to enjoy reading other authors that aren’t top-notch.

Garbage in, garbage out. I really believe that we mustn’t read bad writing. Not even mediocre writing.

But maybe I digress.

So. I was reading an impressively well written book that took a dark, too-close-to-reality turn (extinction of the human race) and I had to stop.

It was too much.

I decided I needed something light. I remembered a previous book that made me laugh out loud. Let’s Pretend This Never Happened by Jenny Lawson. I share some of her issues. I struggle with depression, anxiety, anti-social behavior.

So I looked her up in my local library online, and downloaded the ebook for her second one, Furiously Happy.

This one did not disappoint. I found myself chuckling and giggling in every page as usual.

At page 16, I had reached some saturation point and had this hilarity attack that bordered on a familiar but long absent sensation: screaming meemies. And out of all the funny things she had made me laugh at, this was possibly the least funny. Only mildly amusing.

And yet, there I was on the precipice of maniacal laughter.

And then it fed on itself in a maniacal feedback loop and I started sort of folding in on myself, forgetting to breathe, my face frozen in what I imagined as a macabre grimace, knowing I was about to lose my marbles. 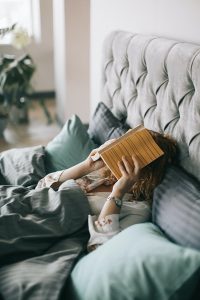 I had to put the Kindle down, and step away. Gather myself, as it were, think about it.

I realized that with everything going on in this world for the last four years, my brain hungered for humor. Was absolutely famished for fun. And it inevitably went off the deep end when I finally got some input that wasn’t dark and foreboding and stressful. The floodgates had opened.

So, I had some stolen moments of being Furiously Happy. And I thank Jenny Lawson for that.
I think I’ll keep doing it.

Because if I’m going to lose my mind, I’d rather it is while laughing maniacally, than while curling up in the fetal position, grinding my teeth, and thinking apocalyptic thoughts.

A suprising number of couples break up on Valentines Day. Is there not enough chocolate to go around?