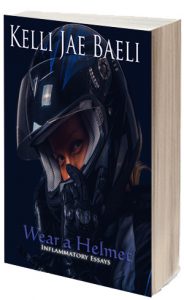 In Wear a Helmet, Baeli again displays her ability to swing from unapologetic humor to revealing even the most painful fragments of her psyche. From Early Voting for Idiots & The Insane, wherein she laments the often confusing and convoluted items found on a ballot, to the ignorant among us in Them Thangs that Hold up Books, and on to a painful journey through her own healing in Herniated Disco: Lies & The Lying Doctors who Tell Them, and an examination of hoarders in I Don’t Keep Hoardly Anything, Baeli marches fearlessly toward the politically incorrect, waving her unique banner of blunt honesty.

5.0 out of 5 starsWitty, Sarcastic, and Intelligent Compositions

I absolutely loved this collection of essays by Kelli Jae Baeli. She delivered a fine collection of witty, sarcastic, and intelligent compositions that tugged at all of my emotions. Some of the stories had me laughing out loud, many had me in awe of her diverse knowledge and intelligence, and some had me concerned for her well-being. As I sit here reading this book while the moving van company packs my personal belongings for a long distance corporate relocation, I can relate to some of her experiences as she prepared for and actually experienced her move to Colorado over the course of several essays in Wear a Helmet.

I hope that she continues to assemble these types of essays in the future, in addition to her fiction and non-fiction publications.

From Knock & the Door Won’t Be Opened to You...

Experience has shown that I don’t usually know who they are, anyway, and if I don’t know them, the Knockers are probably some local church-goers who wish to save my soul from its current trajectory to an eternal fiery furnace set up by the loving Christian god, and for which there is no evidence. I used to toy with these people, by answering the door and when they asked if I went to church, or if I’d accepted Jesus as my personal savior, I offered some scandalous and disrespectful retort designed to spin them into spiritual confusion. (Something like “No, I can’t accept Jesus as my personal savior, because Satan is my deity of choice, and he doesn’t like Jesus very much.” Or I’ll go to the door with a ketchup-smeared chef’s knife in my hand and growl, “Can’t you see that I’m in the middle of an important ritual?”)

NO SOLICITORS.
If I don’t know you, don’t knock. This goes for church-people too.
Knock, and the door won’t be opened to you. A stranger is just a person I haven’t SHOT yet.

I added a little graphic of a hand holding a gun. I haven’t heard a knock since. Although I did find a package that the UPS girl had quietly left for me yesterday. She didn’t knock. Maybe I should add an addendum that package delivery people were exempt from a bullet.

The Unbearable Lightness of  Being UNBEARABLE
How Spammers Really Make Money
Vicious Cycle:  What No One Talks About
Politically Incorrect Kevlar
I Don’t Keep Hoardly Anything
Medical Professionals Were NOT Stunned
FUBAR
People Are Just M&M’s
Here, Hold My Brain While I Vote
PC, Bad. Honesty, Good
News I’d Like to Hear
The First Idiot & His Right-Hand Dick
Maybe, Just Maybe I was Wrong
Knock & the Door Won’t Be Opened to You
Awareness, Focus & Mindless  Lemmings
Pretend it’s a Secret…
Drag Shows are Aptly Named
The Hunter Conundrum
Maverick AKA Reckless
Second Presidential Debate
“Don’t You DARE say I’m Unique!”
Burning Bush
Early Voting for Idiots & the Insane.
Lights! Camera! Grief.
Them Thangs That Hold Up Books.
Movie Review: The Descent
Herniated Disco:  Lies & the Lying Doctors Who Tell Them…
Herniated Disco: Motivations & Ruminations
Herniated Disco:  How the Bleep Do YOU Know?
Going to Denver Because You’re Dead (1)
Going to Denver Because  You’re Dead (2)
Kindred Molecules, Deja Vu,  and the Noosphere
Maintenance Mike & The Domesticated Harpy.
Gay Marriage in the US and Why it Has Not Been Legalized.
Footie Pajamas in the Street.

"In my experience, the amount of offence that the offended takes is commensurate to the amount of respect they have for the offender. I rarely feel offended by opinions, but then again, I rarely respect the opinion or the source of it until I've evaluated it. If it's a bad opinion, I don't lose respect I never had for it. If it's a good opinion, I gain respect for it. At no point does whether or not it's offensive factor into the matter. There is this to say as well; It is important to be discriminating in what opinions one takes seriously, otherwise in short order one finds themselves paying so much attention to the people they should ignore that they end up ignoring the people they ought to be paying attention to." ~Brandon Jones