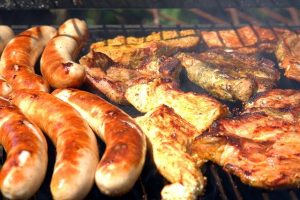 Beef, chicken, pork. Why are there only three meat choices?
Okay four, if you count fish. I don’t eat much fish, though, so for me, it probably doesn’t count. I like seafood, especially crab, lobster, shrimp and scallops, but not fresh water fish, except for the occasional pollock. Most fresh fish, ironically, doesn’t taste fresh to me, it tastes…fishy.
Anyway.

Meat is actually defined as “the flesh of mammals used as food, as distinguished from that of birds and fish” which means that poultry and fish shouldn’t be on that list anyway. That leaves two meat, poultry, fish.

So. Still only three.

Okay, so maybe this is about the protein entrée. That might be a better description of what I’m getting at. And yes, I know about beans and tofu, and the “meat” of a nut, but that’s not what I mean by a protein entrée.
I mean…you know. MEAT.

There are some things I have no desire to eat, and some I won’t eat, even if I’m starving. For-real-starving. (Although, who knows how your brain might change its mind in certain situations). But I won’t be doing any of that survivor-show-sensationalism of munching on worms or spiders or scorpions or cockroaches. No ma’am. No sir. No how. Just in case you were doing that be careful what you wish for thing in your head.

And I know some people like organ meats, but I don’t. I did, for a time like fried chicken livers, but that was short-lived. Especially when I discovered that the liver is responsible for removing toxins. Sounds ill-advised to eat an organ that does that.

Even if there were more choices, suddenly, it might be hard to eat it because since the beginning there have only been 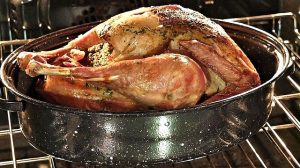 those four. I mean three–?

Okay. Wait. There’s turkey. But that’s poultry. And apparently there’s some unwritten rule that you can only have that once a year. And it is, after all, a lot like chicken.

What about lamb? When I was in New Zealand, of course, lamb was easy to find. But here in the states, (at least where I’ve lived) it’s almost impossible to find a good piece of lamb.

Don’t get me started on how some cultures eat dogs and cats. I draw the line at pets. I just do. there must be a line. Just like the line with I drew earlier with survivor shows. But what about other wild animals? Why don’t we eat hippopotamus?  Or Tasmanian Devils? Or gophers? Or Flamingos? Or rhinoceroses (rhinocerosi? ).

On the more common side, there’s rabbit. Quail. Pheasant. Bear. Duck. Goat. Bison. Alligator. Elk. Deer. Moose. Mutton. Ostrich. Snake. Squirrel. Raccoon. Only to be found at highfalutin restaurants and only for people who don’t mind dropping a C-note on one meal.

I’d eat rabbit if it was sold alongside the chicken and beef and pork in the meat department of my local grocery. I’ve had it before and liked it. Why is that missing? My wife says it’s because bunnies are too cute to eat that people won’t want to. Well, I think chickens and pigs and sheep and cows are cute, too, but I eat them.  It’s easy to do, when you never have to see their faces beforehand, nor do you have the unpleasant task of taking their life in order to have that meat. That’s the cushy world we live in now in developed countries. Someone else does the wet work. We just see a package of meat. 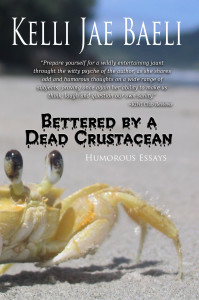 I love crabs more than almost anything, but they aren’t cute at all. Okay, maybe this one. But mostly, no, they just look like a giant spider. With a shell. I already wrote about them in Bettered by a Dead Crustacean. Which is also the name of one of my humorous essay collections.

{steering the focus-mobile back onto the highway}

So, if we ate a wider variety of meat (apologies to vegetarians and vegans), then it would be much better for the planet and the ecosystem, and maybe we could figure out a way to hunt them in the wild, rather than pin them up in a cage. I’d feel much better about that.

Anyway. Apparently, part of getting older is that you start to get tired of things, and begin wishing for something new, and food is no exception.

If that’s the case, I’ll just have to live with it, or look harder for new recipes. Because again, I will never eat a bug on purpose, no matter how bored I am with my food choices, or how hungry I might become.

serpentinesir-pen-teen Of, characteristic of, or resembling a serpent, as in form or movement. Having a winding course, as a road, sinuous. Shrewd, wily, or cunning.

Justin- "I'm not a child. I'm turning 18 soon. That means I can vote, and get married, and join the army."
Emmett- "Hopefully not on the same day."
~from Queer as Folk