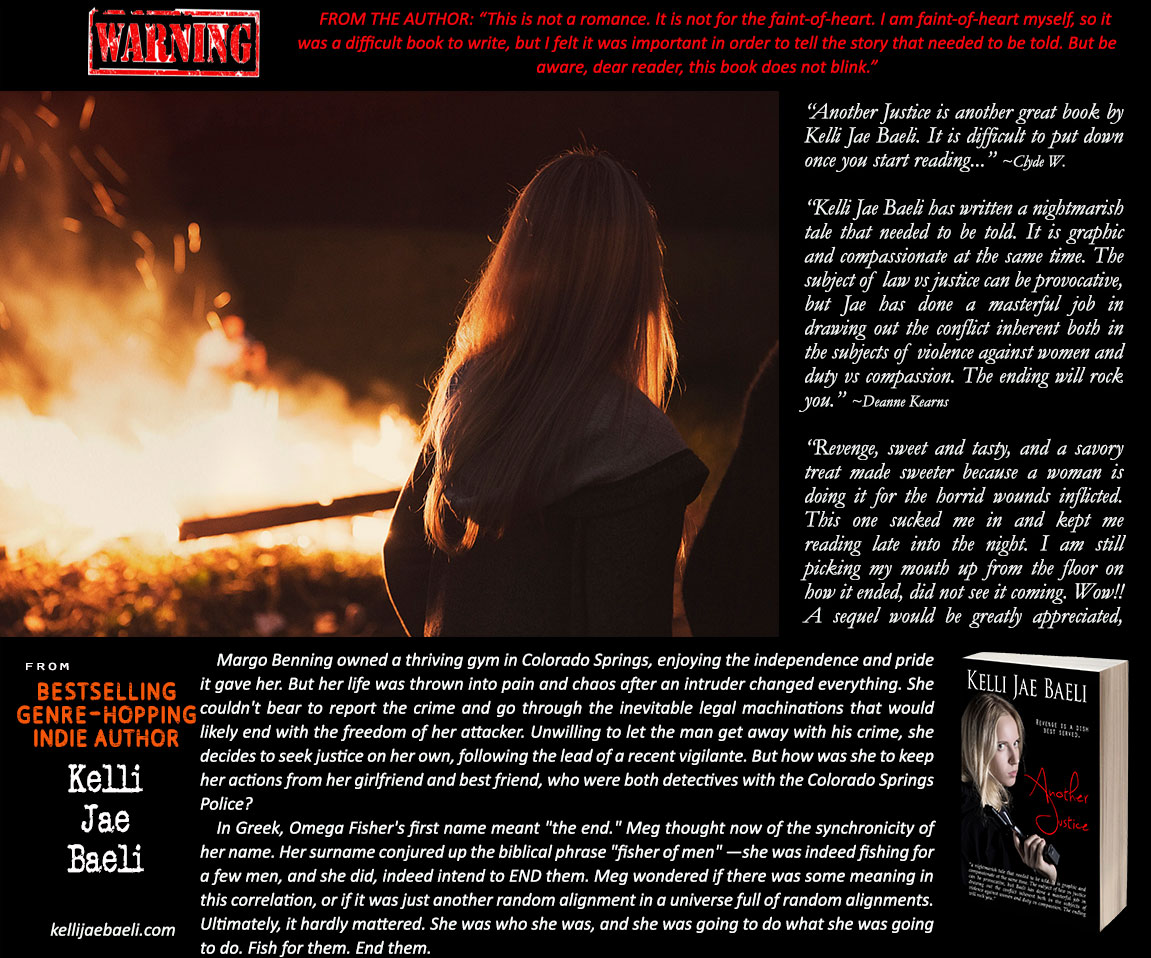 Revenge is a dish best served.

Another Justice was originally a screenplay that was inches away from being produced. I had met an Indian cinematographer who was in the states to take a class in filming from helicopters, and he was interested in the script and had a producer friend he wanted to involve. All was going swimmingly, until the cinematographer returned to India to set things up and fetch equipment. It was just before the tragedy of September 11th. After that horrible day, he could not gain passage back to the U.S. and the project floundered and died. I shelved it, but then returned to it again recently, feeling it should at least be novelized, since it was not apparently going to grace the big screen. Or the little ones, even.

Aside from Also Known as Syzygy, I count this book as the hardest to write. Hard, because once I opened up this can of worms, I had to really look at them, watch them writhe, get my fingers in the dirt and muck and commune with them. It was the only way to tell this story; a story I feel needs to be told and re-told until all the right people hear it.

There are terrible men in this world who will do terrible things. And there’s a sometimes terrible justice system that re-victimizes the victims while the perpetrators go free. I know I am not the only woman to entertain the idea of a little vigilante justice. This book was just the embodiment of that idea, taken to its logical conclusion. I hope it will also be a source of dark entertainment, if only in the drama and suspense of it all.

To me, this is a mainstream novel, even though it has some lesbian characters in it. The story is not about orientation. It’s about people who are dealing with extraordinarily difficult ethical dilemmas. It’s about revenge. It’s about the weaknesses in the justice system. It’s about human nature.

This book also contains graphic scenes of sexual violence. It is not for the faint-of-heart. I am faint-of-heart myself, so it was a difficult book to write, but I felt it was important in order to tell the story that needed to be told. But be aware, dear reader, this book does not blink.

She had woken with her cheek against the grass, the earthy scent competing with the charred smoke in her sinuses, the taste of her own blood in her mouth, the raw burning elsewhere. With little attention to logic, she stumbled along the sidewalk one lane over, walking until the cacophony in her head dulled into a drone. Shadows patrolled the streets, night lamps casting silhouettes of a frantic, grotesque cavorting of the macabre.

Neighbors stood on the sidewalk across from the conflagration, arms folded in the chill of the impending evening, talking amongst themselves.

She wondered if anyone had rushed into the house to rescue them. Now, the structure was engulfed. It was now a job for the fire department, and men with protective gear and high-powered water hoses.

Something heavy and sharp moved in Meg’s chest. No. No. I have to—What did she have to do?

She looked down at the door of the Kia, and then met her own eyes in the glass of the window. A voice in her head told her she had to leave. She wasn’t sure why. The same voice told her that she could not appear in the lobby of her dorm looking the way she did, her face and arms sullied by soot, her hair a tangle, eyes puffy and red, body bruised, mind shell-shocked. She couldn’t just return to her dorm room, even if it was the only other place she called home. No. A hotel. She had to go to a hotel. She could make no sense of it, but it was the only voice which was operational, the only counsel she had access to. She couldn’t think. Couldn’t get her mind to function properly.

One last look at the murmuring, voyeuristic neighbors, milling about, and the view of the water jets from hoses wielded by firemen, and she reached for the door handle and got in, driving away from the nightmare this day had become.

Pushing into the neon-strobing hotel lobby, she jostled a rack of marketing brochures, ignoring the curious examination of the twenty-something earbud-wearing clerk, as she handed him her credit card. She signed the form and he gave her the keycard, which she carried tightly in one hand as she shuffled down the long corridor, entered the room, and collapsed on the bed.

I think I’m digressing. Or being parenthetical. Or Parenthetically digressive. I’m supposed to be writing about Cows with Guns, not Australian pop bands from the 80′s. [And by saying this, I'm dating myself. Good thing, since no one else is dating me.] SIDEBAR: Note that the last statement was not parenthetical because the comment was in brackets. So I was being, at best, brackish.

“Not a wasted word. This has been a main point to my literary thinking all my life.” ~Hunter S. Thompson