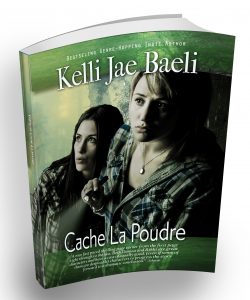 “A nice fast paced thrilling page turner from the first page right through to the last.”
Being chased through the wilderness, while a great bonding exercise, is not the romantic getaway they were expecting.

What if missing your plane also meant missing your wedding? For Danica and Rikki, the solution seemed to be a ride from the pilot of a small plane headed in the right direction. The pilot only has one short stop to deliver supplies to a ranger station in Colorado, and then he can happily deliver them to their destination.

But at the remote landing strip in the wilderness of Cache la Poudre, Danica and Rikki are instead turned over to an armed man, with the worst of intentions. They manage to escape into the thick forest, but find themselves ill-equipped to survive the frigid temperatures after nightfall in the mountains. All their belongings are still back at the plane; they have no weapons, no water, no food, no shelter.

Finding their way out of the hinterlands without getting themselves violated or killed is certainly the goal, but they can’t bring themselves to run far, even if it is to safety. Theirs aren’t the only lives at risk, and the pair will have to use all their ingenuity to survive, evade capture, and lead the others to safety.

Atop the wool blanket, with the other covering them, she turned to her side, studying Dani’s tanned, lean, moonlit features as she slept. Such a striking woman. Why had she never noticed that in all the years they had grown up together? Lazy, adventurous days playing games, cowboys and Indians, Tarzan and Jane—that had been their favorite: Tarzan and Jane. Every Saturday afternoon, found them glued to the TV, when Tarzan reruns came on. They even built a jungle tree house in the woods near her backyard, and learned to swing through the trees on ropes they imagined as vines. Once, they switched roles, when Rikki wanted to be Tarzan. She had tried to pick the much bigger Danica up and whisk her away in her arms (saving her from the band of marauding pygmies) but they wound up falling in a heap on the ground, giggling hysterically.

In the cloying darkness of the forest, sleep curled its nocturnal fingers around Rikki’s brain, and she drifted, finally, a smile pulling at the corners of her mouth.

At some point, the easing rain drew her out of slumber. Did she hear something?

A thick hand clamped over her mouth, and she was wrenched up from the ground in the strong grasp.

“Be quiet, or I’ll kill your girlfriend,” the measured tone said into her ear.

Immediately, she stopped struggling, as he covered her eyes with a blindfold, taped her wrists together in front of her, and lifted her astraddle a horse. She felt him swing on behind her and they were moving, Rikki aware of the even gate of the animal, as they moved through the forest.

Hatch was silent, his arms clamped around hers, as he guided the animal, the horse’s hooves a slight mashing sound in the soft ground. She heard the squeaking behind them, and realized the horse was pulling the cart. The cart that probably has Danica lying in it. She knew he’d probably knocked her unconscious before even waking Rikki. That was the sound that woke her. But not soon enough to do anything about it. And he had, of course, taken the Glock.

Eventually, they stopped, and he hauled her off the horse.

Soon, he removed the blindfold, and they were under a cloister of trees, where he shoved her into a wooden crate suitable for a large dog, but not much more. It seemed well-constructed enough that she would have a hard time breaking out of it. The cart was nowhere in sight. She wondered if Danica was going to be in another cage somewhere. The prickling fear that Danica might be hurt, or worse, was too terrible to imagine, so Rikki pushed the thought away.

With her bound hands, she hugged the door of the cage, which Hatch was putting a chain through. “Would it be bold of me to ask what the holy hell is going on?”

He ignored her, just tossing her a bored half-smile.

More silence as he attached a padlock to the chain.

“Do you speak English?” she asked.

Irritated now, he regarded her. “Will you please shut up?”

“What are you planning to do with us?”

“We’re going to need a babysitter,” he said.

“You have a baby out here?”

“Yep. And you’ll be taking care of it for a day or two. Just cooperate and it will all be over soon.” Hatch cupped his hands around the end of a cigarette and lit it.

As he walked away, she asked, “What will you do with us after that?”

He didn’t answer, just kept walking, the smoke trailing out of his mouth as he went.

His silence made her uneasy. Maybe he’d just let them go after that. Or maybe that was just wishful thinking on her part. Hatch wasn’t in charge, Gleason was. That much was obvious by the events at the plane when they escaped. She sighed, and leaned against the slats of the crate. She wanted to see Danica. Needed to know if she was okay.

Twisting, she reached out to pull on the padlock. It was secure.

Her feet were nearly numb with cold, and she wished she had her gloves. Those were in the carry-on bags. And the bags were here at this camp somewhere. If she could get out of this cage, she could find them, and some other things they’d need.

The moon was being kind, tonight, providing just enough light to see by. Searching the ground around the cage, she saw a few rocks. Spying one that looked like it might have a sharp edge, she reached through the slats of the cage, straining to get her fingers around it, but it was just out of reach.

Opting for the approach that Danica would have tried first, she leaned back on her butt and kicked at the door. After five or six hard kicks, she realized it was not going to be a solution. Each strike sent needles of pain through her cold-bitten foot.

Thinking for a moment, she took a mental inventory. They had taken everything from them. Her kangaroo pouch was gone. Not that a driver’s license would help. She couldn’t jimmy the lock with that, like she could a regular door. But whatever she did to get out, they’d be able to ID the person who was in here, she told herself insipidly. The weather is numbing my brain, now.

She had no tools. Only the clothes she was wearing. Clothes. Pulling her shirt up with her bound hands, she lifted her bra up, and bit into the seam at the bottom of one cup until it tore, and then worked the underwire out. First, she used her teeth to grab the end of the duct tape around her wrists, and pulled until she got her hands free. Then, she grabbed the padlock, working the wire into the hole—jiggling, turning, pushing—but it was just not shaped properly to release the tumblers. And after all that lock-picking practice.

Turning back to the rear of the crate, she reached through the slats again, with the wire, and pawed at the rock she’d seen. Still not close enough.

Sitting back to think about it for a moment, she then poked the end of the underwire into her sneaker, and shoved her leg through the slats, the wood scraping her leg. After a few awkward minutes of pawing with her leg, the underwire hanging from the sneaker, she got the rock close enough to grasp.

Using the sharpest side of the stone, she began to saw at one of the slats. After a few minutes of that, it was clear she would not be able to break through even one slat before, say, next Tuesday.

Sighing, she dropped the rock.

She was trapped. And that’s all there was to it.

"I have a sneeby foamy bed that sucks you in. It's sort of like the Hotel California Bed. Women check in but they don't check out. With or without dark desert highways and cool wind in my hair."

Honest criticism is hard to take, particularly from a relative, a friend, an acquaintance, or a stranger. ~Franklin Jones

"Isn't it enough to see that a garden is beautiful without having to believe that there are fairies at the bottom of it too?" ~Douglas Adams