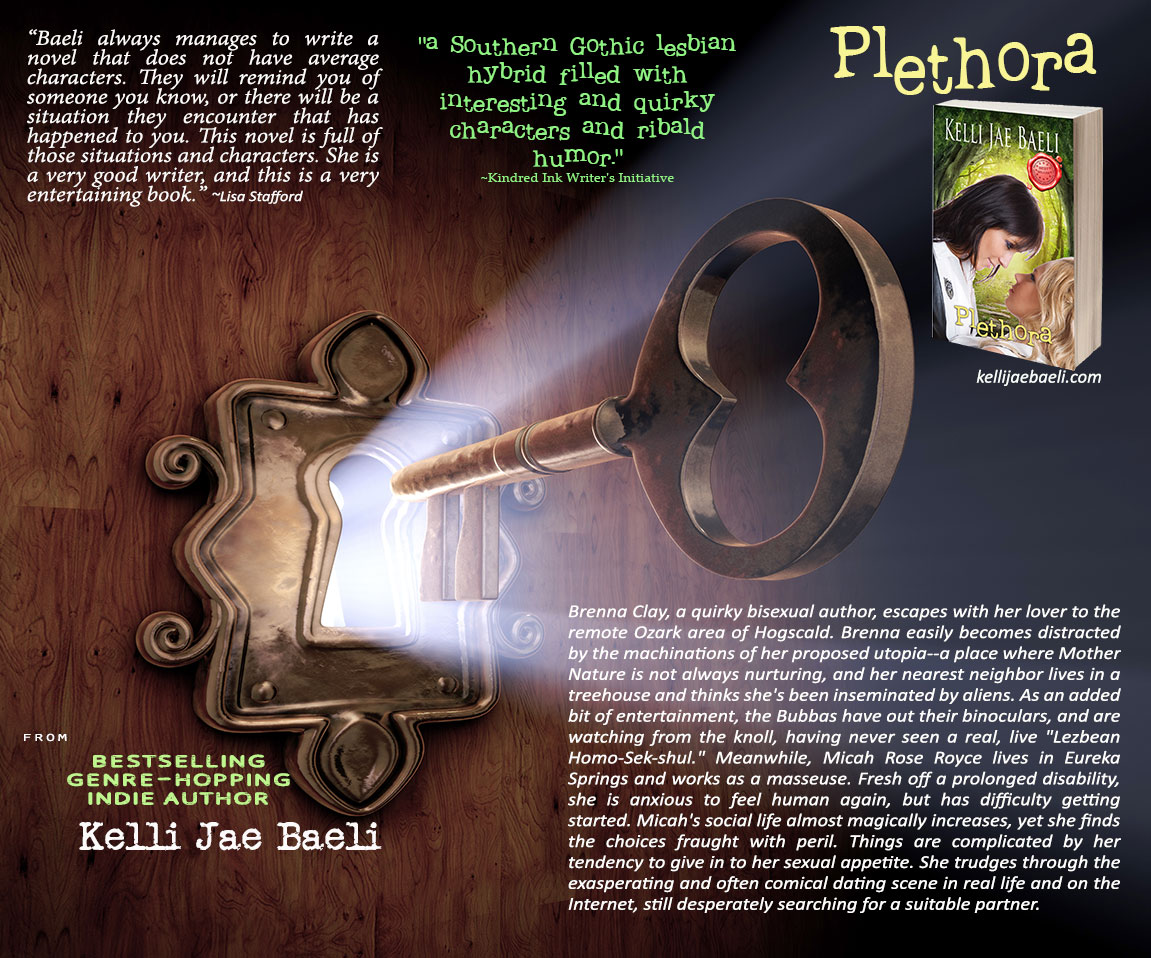 The old one! reviewed Plethora

This is like an adult fairy tale September 25, 2016
This is like an adult fairy tale. It is so absorbing and yet so realistic. There was a “plethora” of wonderful characters and I loved them all. I really liked Brenna and Micah but absolutely loved Tilly. Ms. Baeli has such a fantastic way of making the women so real that I found myself wanting to be friends with them all. The same quirky sense of humor found in this author’s books surely abounds in this one. So, in a nut shell, don’t hesitate to read this if you want an all around feel good book with a predictable ending but getting to the end is a magnificent read that will stay with you for a while.

Brenna Clay, a quirky bisexual author, escapes with her lover to the remote Ozark area of Hogscald. Brenna easily becomes distracted by the machinations of her proposed utopia–a place where Mother Nature is not always nurturing, and her nearest neighbor lives in a treehouse and thinks she’s been inseminated by aliens. As an added bit of entertainment, the Bubbas have out their binoculars, and are watching from the knoll, having never seen a real, live “Lezbean Homo-Sek-shul.” Meanwhile, Micah Rose Royce lives in Eureka Springs and works as a masseuse. Fresh off a prolonged disability, she is anxious to feel human again, but has difficulty getting started. Micah’s social life almost magically increases, yet she finds the choices fraught with peril. Things are complicated by her tendency to give in to her sexual appetite. She trudges through the exasperating and often comical dating scene in real life and on the Internet, still desperately searching for a suitable partner.

Sometimes the post office forgot to cancel the stamps on outgoing mail. The result was free postage, as far as Micah was concerned. She’d been hoarding those little jewels for months; just like she did those pennies that she’d drop in that change-sorting contraption she bought at Target. She’d molested that stash plenty of times, and now it was the stamp she needed. She tried to peel it from the orphaned envelope, but tore it at the only place where the glue actually did what glue was supposed to do. “Shit.”

Slamming around in the desk drawer for scissors, she liberated the stamp by simply cutting it out of the envelope. Rubbing a withered glue stick on it, she pasted it to the envelope she was sending to the Veteran’s Administration. It was still another copy of the addendum she sent to them three times before. She sent it every time they asked for more information, having overlooked the fact that her 10 page letter was not a synopsis for a novel, but actual details about her claim.

She licked one side of the envelope, feeling an odd sensation on the burned portion of her tongue where she had been a bit overzealous with her first sip of coffee that morning. Years of coffee consumption had left her taste-buds a little retarded. She could no longer tell the difference between a Pop-Tart and a sprouted wheat bagel. It would be nice if her hips and stomach did the same, and just cataloged everything “fat free.”She licked the other side of the envelope and got a paper-cut on her tongue.

Grabbing her forearm crutches, Micah stood up awkwardly, her tongue bleeding out onto her lip and down her chin. She nestled the envelope between her teeth, and had to quell the urge to bite through the paper, tear it to shreds like a lonely puppy left at home all day.

Hobbling out of the tiny guestroom, crammed with all the worldly goods she could fit into it, she made her way to the door. Halfway down the rickety front steps, she caught the rubber base of one crutch in the crack between the boards, and had to fight to keep her balance. She would not allow herself to do something as theatrical as fall down the steps and lie there in the dirt until her erstwhile room-mates-cum-sugar-mamas returned from work. Wriggling her forearm out of the bent metal cuff, she pulled on the crutch. It came free without much effort, and her excess exertion was rewarded when she managed to knock herself in the head with the top of the crutch.

She stood there with her eyes closed for a long moment, waiting for the line of blood to tickle its way down her forehead and pool above her right eyebrow, thankfully not merging with the blood oozing from her paper-cut tongue into a river of crimson disbelief. So that’s what eyebrows were for…

Without touching the wound, she just continued gingerly down the steps and along the driveway toward the mailbox, numb with self-resolve. When she reached the box and opened its drawbridge-door, a bee flew out and stung her on the chin. She swiped him to the dirt and ground him into it with the rubber tip of her crutch. Taking the envelope from her teeth, she thought about how she’d like to be a bee on the wall when it arrived at the Department of Veteran’s Affairs with the bloody imprint of teeth on it. Perhaps it would help her case.

Barely making it to the bathroom, her bladder aching and threatening to inflict still more humiliation, she tried to pull her pants down and deal with the crutches at the same time, and promptly knocked her last roll of toilet paper in the toilet. It must have wanted to go home.

She made do with a paper towel and paused in the bathroom only long enough to apply more antibiotic on the boils she’d developed on her chin and neck, and chastise herself again for not getting in the shower and washing her greasy blond hair.

By the time she made her way back to her old brown desk chair, she needed a cigarette. She knew she should quit, but it was one of the few creature comforts she had left. Every time she quit smoking, something bad happened and made her want a cigarette, so she figured if she continued to smoke, things were bound to improve.

She set flame to the blessed cheroot and inhaled, allowing the cigarette to dangle from her mouth like she was James Dean, while she logged on to get her e-mail. Junk mail filled her box with promises of work-at-home riches, zero-percent Master Cards, and sales on peripherals she could never dream of buying.

Pulling the evil fire-stick from her lips, she discovered too late that it was sort of glued there by whatever magic that’s created by spit and dry paper. Wish I’d known this earlier when I was forced to use a withered glue stick on that envelope. This paper-to-lip attachment caused her fingers to slide down the length of the cigarette, where she summarily burned both digits.

She yelped, and the action tore skin from her lips as her mouth came open. This released the cigarette, which then fell to her lap and nearly caught a certain intimate clump of bush on fire.

It was going to be another one of those days where she should have just rolled back over into Narnia, and forgot about waking up.

"Instead of constantly trying to make a silk purse out of a sow's ear, just stop dealing with pigs."

“Just write every day of your life. Read intensely. Then see what happens. Most of my friends who are put on that diet have very pleasant careers.”