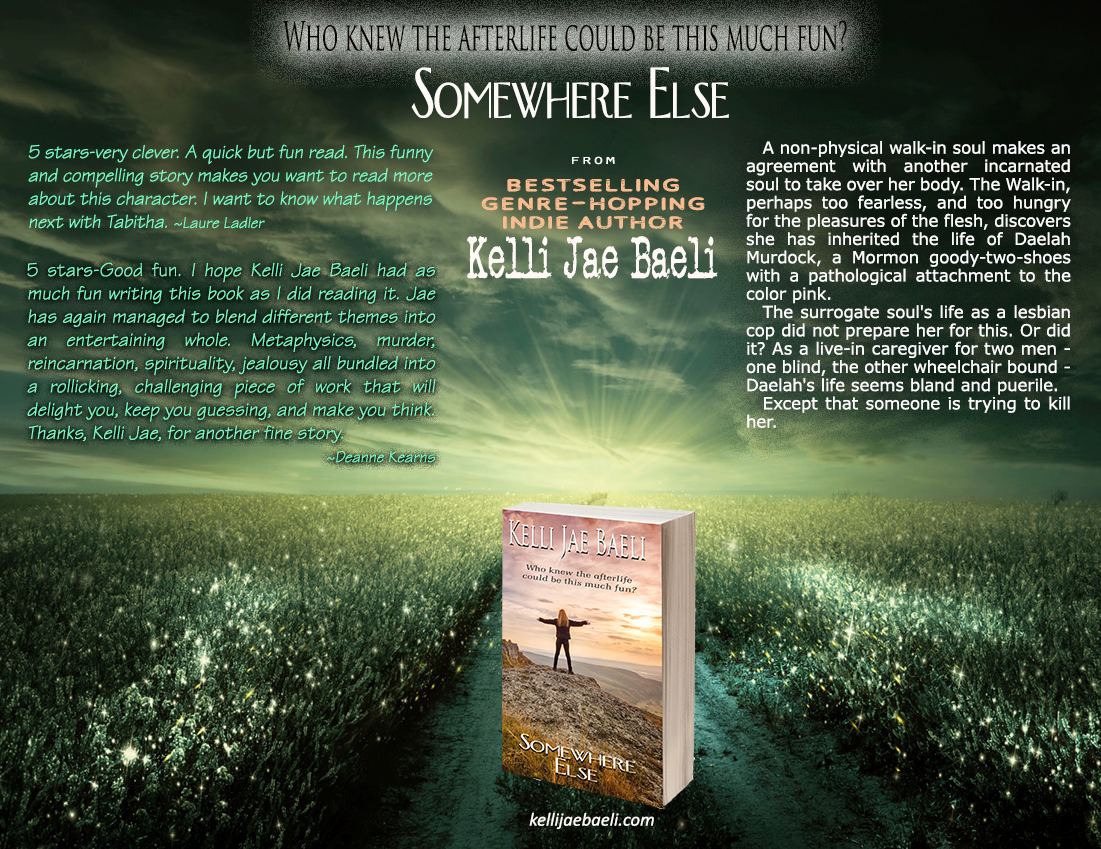 Interesting change of pace May 4, 2017
Although not my preferred subject matter, I decided to give Somewhere Else a try since I’ve thoroughly enjoyed all of the other books that I’ve read by Kelli Jae Baeli. This book focused on alternative ideas about our existence coupled with Baeli’s trademark wit and humor. This novella was entertaining and opened my mind to that alternative thinking.

I hope Kelli Jae Baeli had as much fun writing this book as I did reading it.

Jae has again managed to blend different themes into an entertaining whole. Metaphysics, murder, reincarnation, spirituality, jealousy all bundled into a rollicking, challenging piece of work that will delight you, keep you guessing, and make you think. Thanks, Kelli Jae, for another fine story.

A quick but fun read. This funny and compelling story makes you want to read more about this character. I want to know what happens next with Tabitha.

My trip downstairs did not garner much information. The house was like a familiar place from long ago, yet almost erased from my memory. The tall, angular blind man holding the saxophone, with his aquiline nose, and almost-flawless skin, pallid from a lack of sunshine. And the crippled painter. He seemed familiar, but not…really. But I lived here in their house. Or they, in mine. That much was clear, if only by the reaction of these two housemates. They seemed familiar, but I didn’t know them, as odd as that contradiction was. I had known better than to say, who are you?

I was aware of several things I suspected I shouldn’t know at this point, but precisely who these two men were, I wasn’t sure about. And what was up with that cat’s-eye-view downstairs? My vision had been moving around with the cat…as if my eyes were attached to the cat’s head. I was the cat’s eyes. I could hear what the cat heard, too. I was in the cat? How is that possible? I saw the wretched pink purse on the dresser, and pulled out an aggravating pink wallet. The driver’s license read,

Tapioca? Who the hell would live on a street called Tapioca? Was Pudding Circle all full-up? I perused the license again. The photo looked like my reflection in the mirror from earlier. I was apparently female, and 36 years old.

Digging through the pukey pink purse, I found a side pocket, and in it, a folded bulletin from the Church of Latter Day Saints. Those were Saints who weren’t quite here, but would be, tomorrow.

The newsletter had a mailing label addressed to me, or the Daelah-pink-person, anyway, which meant I might actually be a card-carrying member of the Polygamy Pack.

Suddenly, I wondered if the two men downstairs were my husbands. Although why I would have chosen a blind man and a cripple for my spouses, was unclear. No. wait…it didn’t work that way…it was the men who got to have numerous wives…that’s certainly not fair. Unless this was another planet or an alternate reality where there was a matriarchy in place. That would be cool.

Glancing around at my obvious pink fetish, the answer to that was a little easier to guess. I had a screw loose, and they were the only two Mormon men left who would have my stupid pink ass. Except I couldn’t suffer from a blow to my self-esteem, since this was about that Daelah-person. Not me. Except, once again, here I was, being her.

Also in the handbag was a tube of lipstick the color of–again, no surprise–Passion Pink. I thought I would hurl if I had to look at all this pink much longer. My gut was already queasy. Moving into the bathroom, I checked my reflection once more, just to be sure, and then opened the medicine cabinet, fully expecting it to be lined with bottles of Pepto Bismol, if only by the fetish of its color. There was only one bottle of the stuff, yet I was not encouraged by that paltry representation. I grabbed it, screwed off the lid and took a slug of it. I was drinking something pink to quell the queasiness brought on by so many pink things. Oh, the irony.

When I put it back, I saw a prescription. Alprazolam. A generic form of Xanax. This told me that Daelah Murdock had some sort of anxiety disorder, though the only anxiety I felt now stemmed from my confused, Swiss-cheese memory and the proliferation of pink in this infernal bedroom. A plastic bottle of Tums resided next to the Pepto, its contents graced by periodic pink tablets as well. What was up with this woman? Why was she so obsessed with pink? This woman. Me. Not me. Hell’s bells. Closing the cabinet, I noticed in the mirror, for the first time, my hair. I looked like the Flying Freaking Nun, my crowning glory more a hat than a head of hair, if the amount of hairspray was any indication. I opened several drawers until I found a hairbrush, and stroked it through the glue-like texture on each side, yelping when the bristles hit a sore spot. Reaching up, I felt a huge lump at the back of my skull.

Ahhh…that explains it. I’d bumped my head. A frisson of panic burned its way through my chest and up into my brain. What if the Teardrop Essence dream and the downloaded brain matter was the result of a head injury? What if I had forgotten everything about myself and it never reappeared in my consciousness? Maybe not such a bad thing, I reassured myself, considering what I had discovered so far. My attention snapped back to my reflection, and in lieu of an answer to the head injury question, I resolved to let my hair grow out, and get some real body in it, to avoid the churchy look.

I felt I was being watched. Looking over, I saw the cat. It was standing in the doorway, watching me. I wondered if maybe I could send it downstairs for a little eavesdropping again. “Here, kitty kitty,” I said. I was thinking about my earlier discovery about my mind attaching to the cat. Agreeably, it loped over and jumped on the bed. Now, I noticed the infernal pink collar it was wearing. I reached for the buckle, and saw the nameplate on the leather. Polly. Probably short for polygamy, if current experience with Daelah was any indication. “Hello, Polly. I’m about to do you a favor, and then I want you to do me one, deal?” I removed the collar and rubbed her now-unadorned neck. She purred and dropped down to writhe on the bed next to me. I closed my eyes and focused on the cat’s head and thought go downstairs and listen to those two men…

I waited in the darkness behind my eyelids until an image popped into my mind again. A video image. Who knew that traversing the stairs tilted forward and low to the ground, would look so scary? But it was working. I rode along with Polly as she padded into the living room and jumped up on a chair. I even saw the paw come toward my face and a pink (ick…grrr) tongue licking it. Then I focused on listening through the cat.

"Once a Christian becomes entrenched in the faith-ditch, he can only march in one direction."

My most important piece of advice to all you would-be writers: when you write, try to leave out all the parts readers skip. ~ Elmore Leonard

“I picked up the phone to call the police, but then I considered how it would sound when I told them that I was calling from inside my bathroom, where I’d OD’ed on laxatives, and that a possible rapist was quietly passing me notes under the bathroom door.” ~ Jenny Lawson, Let's Pretend This Never Happened: A Mostly True Memoir