This was originally on a Facebook post in 2014. I thought it needed to be shared on my blog. 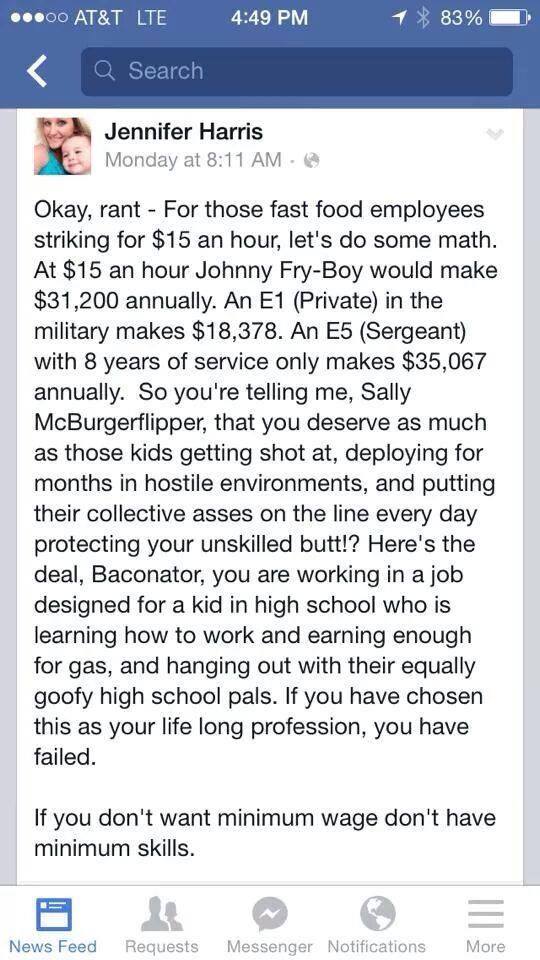 First, let me say that I am a veteran. I have a lifetime disability compensation due to injuries I suffered while enlisted, and trauma afterward. I joined the Army because I wanted an education, so that I wouldn’t be stuck flipping burgers the rest of my life.

I worked at nearly every fast food chain you can name, and in most other service industry segments. I was only able to get an education because of my military disability and being helped financially with school. I am an educated person, with 8 years of college under my belt. Still, had I not joined the army (for better or worse–like a really bad marriage) I would have had to find a way to afford to send myself through school when I had little in the way of lucrative skills. I would likely have been trapped in the vicious circle of not making enough at unskilled jobs to afford to pay for an education that would qualify me for a higher paying, skilled job. And there are myriad ways in which an honest, hard-working person can get trapped in their own lives and never rise above the low-paying job market.

Therein lies the major flaw in Ms. Harris’ logic.
Next, let me point out that only 30% of McDonald’s employees are teenagers. The rest are struggling and usually undereducated people who have families to feed, and bills to pay, just like the rest of us.
So the irony that hovers over it all while Miss Harris executes her sniper attack, is that in order for Sally McBurgerflipper to create a better future for herself, she needs to be able to pay for those college night classes while she’s dropping baskets of fries in the oil. Education is expensive, and the wages at fast food and other service industry jobs do not pay well enough to pull those poor sots out of the poverty pool. That speaks more dismally to the state of our educational system and equality issues than it does to some supposed lack of motivation or intelligence. Intelligence and education are NOT the same thing. In fact, this snotty diatribe tells us more than how sharp her rapier is. The definition of a snob, in my opinion, is someone educated beyond her own intelligence. How is that any worse than someone who wants an education, but doesn’t have the resources to get one? Methinks the lady doth protest too much.
Miss Harris also forgets that Ms/Mr. McBurgerflipper provides her with that Big Mac she eats at lunch break from her own job (Don’t Lie. I don’t think anyone avoids fast food 100% unless they live somewhere it’s simply not available. That’s also a money issue…fast food is usually more affordable than other foods). Also, someone akin to Mr. McBurgerflipper does her dry cleaning, keeps her city streets clean, repairs her vehicle, (and indeed BUILT her vehicle in a factory), constructed her house, planted flowers in her park, washed her car, caught the crab for the crab legs in that Finer-dining establishing that Ms Harris no doubt prefers, and also babysits that baby she is holding so proudly on her lap.
My point is that it takes all kinds of people with all kinds of skill-sets to make the world function.
Overall, this splenetic display is an oversimplification of a very complicated set of conditions. Vilifying blue-collar workers is not the solution.
And finally, the issue here is not that soldiers deserve MORE money than MCBurgerflippers, it’s that EVERYONE, no 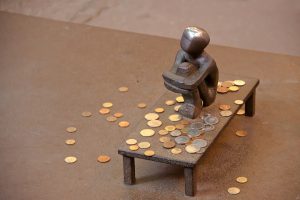 matter who they are or what they do, deserves to be paid a living wage, and that does not rule out also paying wages commensurate with the level of peril–meaning, some also should get extra hazard pay. It’s not about whose job is more glamorous or respectable in the eyes of subjective witnesses. It’s about being able to live comfortably. And I, for one, believe that’s the sort of foundation upon which America was built, notwithstanding recent sieges by Republicans, Religious Zealots and Greedy One-percenters who seek to destroy everything America has stood for.
You did not think this through, Ms. Harris. Put it in park until you understand the details.
OR better yet, go EDUCATE yourself. You seem to have the money to pay for it.

Writing a novel is like driving a car at night. You can only see as far as your headlights, but you can make the whole trip that way. ~ E. L. Doctorow

“Why do you want to shut out of your life any uneasiness, any misery, any depression, since after all you don't know what work these conditions are doing inside you? Why do you want to persecute yourself with the question of where all this is coming from and where it is going? Since you know, after all, that you are in the midst of transitions and you wished for nothing so much as to change. If there is anything unhealthy in your reactions, just bear in mind that sickness is the means by which an organism frees itself from what is alien; so one must simply help it to be sick, to have its whole sickness and to break out with it, since that is the way it gets better.” ~ Rainer Maria Rilke, Letters to a Young Poet