from the Girls in the Band backmatter…. 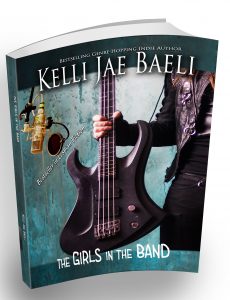 My days in a chick-band are some of my most cherished memories. There were plenty of challenges, but none of them could eclipse the joy I got from performing my music in front of an audience–that instant validation that comes from applause, after you have given your all.

Nothing else has compared to the unique bond I shared with the other girls as we created music together and shared it with whomever would listen.

As things morphed into a situation I could no longer tolerate, I had to walk away from that, and it was very much like walking away from a marriage. Not all unions are meant to continue, and as things became untenable, I had to do what was best for my own well-being. My bandmates were all my partners and the music was the way we made love. The divorce was so painful, that I stopped listening to music altogether, as every song reminded me of something I had lost. It took ten years for me to start enjoying music again, but I still don’t listen to the same music I did back then. I had to find new favorites that had no association with those eight years of my life when I was in a band. This book, in fact, was on the back burner the whole time, but I was never able to write it. I have never returned to songwriting and performing in any real way, but it will always be a part of me, and there are still things about it I can treasure in my stronger moments.

My need to capture life’s moments in words on a page grew more weighty after that, and finally, I realized I wanted to get back to writing books full-time again. I was still someone who communicated with words. I have applied the same degree of love and devotion to this as I did to the music, and now, I can say that I made the right decision. I have the life I want, an awesome wife who supports me at every turn by taking care of me and the house while I write and publish. Now, she is writing her own books, and we have a beautiful future planned.

Things have a way of working out, if you continue to follow your passion.

The purpose of a writer is to keep civilization from destroying itself. ~Albert Camus