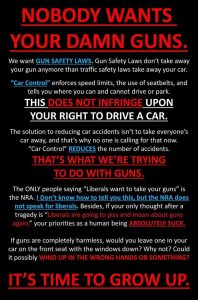 First, I am a humanist and a liberal Democrat. I am also a military veteran. I don’t hunt, because I don’t have the heart for it, and would only do it in a survival situation. I do, however, feel better if I have a gun of some kind to protect me and mine against break-ins. (See, women are naturally like that, since we are the ones who get raped by men). I have no problem doing the gun ownership legally, and proving that I can safely own and use a firearm. Check my background. I have nothing to hide.
Next, I agree with everything on this sign. However, I would add that what we DO want to take, is your WEAPONS OF WAR. You never should have had them to begin with. I’m not talking about your limited magazine hunting rifles (At best, you only need three shots, and then, if you can’t kill a deer with that, you should stop hunting until you have training and practice.) Nor do I want to take your handguns for personal protection, etc. What I DO want to take, is your KILLING MACHINES. The ones with high capacity magazines and rapid fire.
Do you think the framers of the Constitution could have imagined something like the AR-15? Or that regular folks would be toting them around in public like some kind of self-appointed militia? (And by the way, you 2A screamers, that amendment was before we had a STANDING ARMY. We don’t need you suiting up and locking and loading. We have trained personnel for that, thank you very much). And do you think the Founding Fathers imagined using such a weapon to commit mass murders of children? The Founding Fathers who had to load each shot into a musket or flintlock pistol, and were very skilled if they could shoot twice in a minute? A skilled shooter with an AR-15 can shoot 90 rounds in a minute.
What are you so afraid of, NRA-lovers? I contend that you have nothing to fear, and the rest of the entire population DOES. No civilian has the right to own and use a gun specifically designed to kill human beings. Full stop.

"To me, one mark of maturity, is recognizing that when someone is in hell, it may not be a good idea to tell them how great it is for you in heaven."

Drama is life with the dull bits cut out. ~ Alfred Hitchcock

"That's about as likely as you being struck by lightning while being sodomized by Martians.
~ Author Redacted